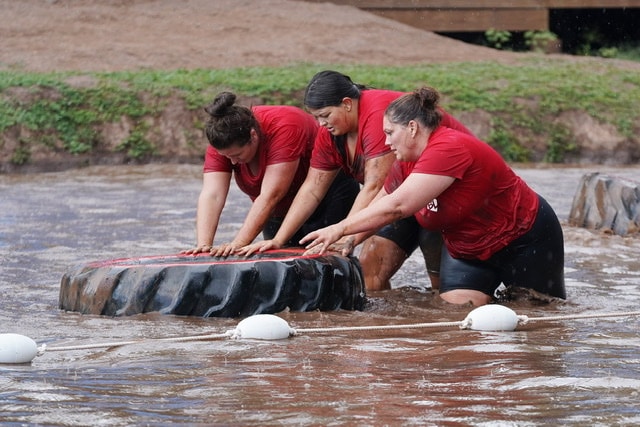 Tonight’s episode of USA Network’s The Biggest Loser kicks off with the Blue Team reflecting on their loss and Rob going home.

Some members of the Red Team seems to shame Phi for still being there and she points out that she doesn’t make the rules and feels bad enough already. However, she feels like she is meant to be there and ready to take on the challenge. Erica reminds her she is worth saving.

The next day, Steve talks to them about diet and tells them to think about their calories as a bank account. I like that idea!

Both teams workout and Erica reminds her team they need to have big numbers this week. Steve keeps his team moving.

As she works out, Megan talks about how she uses humor as a way to deal with her weight. She admits she lost out on a promotion due to her work and doesn’t want things like that to happen anymore.

Megan is frustrated with Steve constantly bringing up Rob, causing them to get into it a bit.

Bob has a pow wow with everyone to see where they stand.

Domenico says he is here to get healthy for his daughter, hoping to lead her to a healthy lifestyle as well.

Megan brings up her frustration and says by doing what she is told, means she trusts Steve and the process.

Delores talks about being raised by a teen mom and a lackey kid, both of which forced her to grow up fast.

Bob tells them they have to trust….the trainers, each other and themselves.

Tire CHALLENGE!  They have to flip the tires from one side to another in the mud….and the first team to complete it wins.

The Red Team is determined to finish despite their struggling.

The teams remain neck and neck, but at the end, it is the Blue Team who wins, getting a five pound advantage at the weigh in.

The Red Team is upset and Dom is taking it especially hard. However, Erica tells him he has nothing to be sorry for. He goes to shave his beard as a symbolic moment for the new him.

After the last chance workout, we get to the weigh in!

Sadly, Phi is going home. However, she is getting a gym membership, nutritionist and other tools needed to lose weight and have a chance at the at home prize.

UPDATE: She lost 21 lbs and is 336 lbs as of now. She is cooking, working out and seeing what works for her body,including dance classes! You go, girl! She looks so amazing and happy.