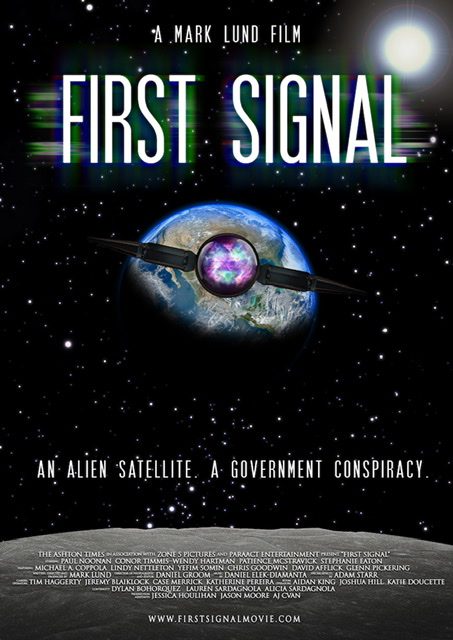 Mark Lund executive producer, director and writer, is pleased to announce that the first official trailer for First Signal has been released. In First Signal when Air Force Space Command receives a signal from an alien satellite in Earth orbit an emergency meeting with the President reveals a government conspiracy. The independently produced science fiction feature was filmed at the McAuliffe Shepard Discovery Center in Concord, NH and the Massachusetts Military History Exposition in Orange, MA.

“I’m thrilled to present the trailer for First Signal. My thanks to the actors, crew and location partners for making this feature film possible,” said Lund. “In as much as First Signal is a character driven science fiction story, it’s also a contemporary political thriller that takes place at the G-7 summit in Brussels in 2014.”

First Signal marks the start of what the producers hope to be a new sci-fi franchise. The idea for the story began over ten years ago when Lund wrote the screenplay First World. Nominated for three screenplay awards and produced as a short film that screened in six countries, the origins of the story revolve around the Apollo space program. With NASA and private space contractors planning a return to the Moon, extrasolar planets being discovered on a regular basis and new communication technologies on the horizon, the timing for First Signal could not be better. First Signal doesn’t just seek to answer the question if we are alone in the universe, but what would the world do if an alien presence was already here.

“Ever since I was a kid and saw the later Apollo missions on TV, I’ve always been fascinated by space exploration and the science fiction shows of the era,” said Lund. “My goal with the ‘First Signal Universe’ is to create a unique fictional story that merges science fiction with major historical events, the government and military against the backdrop of the space program.”

First Signal is scheduled for release in 2020.