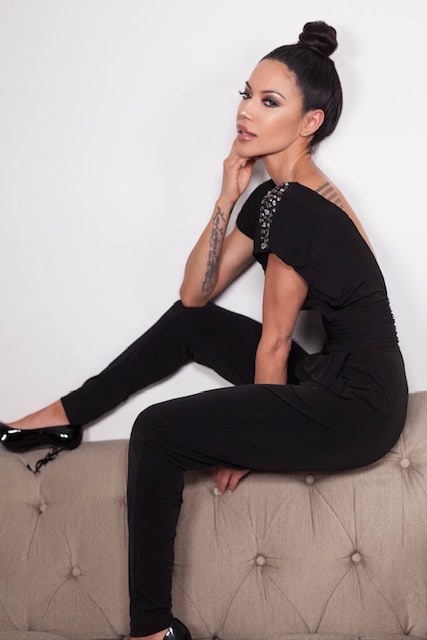 Multitalented actress Veronika London talks to TVGrapevine about her acting, fitness and a surprising talent.

Raised in Toronto, currently reside in Vancouver. Lover of golf, martial arts and chess. Initially wanted to be a publicist, graduated with a BA in Marketing but ended up in front of the camera both in a magazine and on television without having experience. Went on to train in the arts and self development as who we are, is what we bring to the roles.

How was your character on DC’s Legends of Tomorrow originally described to you?

As bright and bubbly. Her life is affected during time travel.

What made you want to be a part of the series?

I love DC Comics and the TV series on the CW Network. When the opportunity arose to be part of the super hero show I jumped on it.

What were you doing when you found out you got the role?

I was actually recovering from a rollerblading injury. I went into the audition not thinking much of it. I was the only brunette and couldn’t even sit because my legs were all sore from the fall. I think at the time I was just being extra bubbly because I felt the completle opposite. The role required me to be bubbly.

What aspects do you like most about your character?

Her bright personality. I tend to play darker roles. This was a nice contrast.

Were you familiar with any of your costars before filming?

I came across two prior to shooting, as it turned out we had the same fitness trainer. It was nice to see familiar faces on set on the first day.

Did anyone on set give you any advice that you took to heart while filming?

On set one of my co-stars, Lisa Digiacinto liked to talk about trusting the process and timing. I found talking to her extremely inspiring and calming.

I recently wrapped the feature film The Last Chapter were a played Donatella, a tough as nails madame that also manages a biker bar.

I love cooking. During my spare time I take cooking lessons. At one point I thought I wanted to be chef or have my own cooking show till I assisted as a co-hosted on a new cooking show that was taped in Montreal. I had no idea how much work went into a 30 minute episode. After that experience I decided to keep that passion to myself and just stick to acting.

HBO Successions. The acting is outstanding.

Tell us about being part of the top 100 in Inside Fitness Magazine?

I have always been an active person, however six month ago I made some changes in terms of adding weight training, meditating, becoming vegetarian and overall taking better care of my mental and emotional well being. I hired a high performance coach that kept me accountable of creating new habits and that has been one of the best decisions I’ve made. I made fitness and health changes to have more energy and clarity. Appearing in the magazine was a nice byproduct which I hope inspires other to make some changes if they desire to do so.