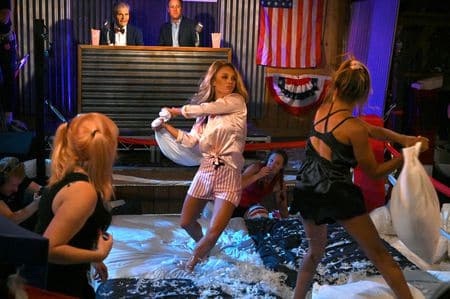 The Bachelor continues with ChampagneGate and Kelsey crying. Hannah Ann is also crying and everyone seems to be getting involved and taking sides. Why are we still on this?

Okay, finally we moved on to Peter’s date with Victoria P. They go to a country store and shop for cowboy/cowgirl gear and go to a concert. They also enjoy dinner and conversation, along with a lot of kissing and canoodling. She opens up about her past and how she had to take care of her sister while her mom suffered from addiction….and it is heartbreaking. Peter is so sweet to her, which makes me like him even more.

She gets a rose….and decides what airplane to go home in….what a date.

Geez, never mind! We are still dealing with this champagne debacle. I’m over it.

Now….the house is against Alayah? What?

Kiarra, Sarah, Tammy, Kelley, Shiann, Savannah, Sydney and Alayah are on this date….which is filled with surprises. The girls hope Peter sees how fake Alayah is on this date. No clue what she did, but all right.

Demi from BIP and Colton’s season is hosting this date, which is a pillow fight theme. Okay…

They dress in lingerie and PJs, ready to fight each other. Fred Willard and Chris Harrison judge.

Kelley is worried about her coworkers and colleagues seeing her in lingerie, yet she is on this show? Hmmm….

Sydney and Alayah are fighting against each other and really go at it like nobody’s business. it puts Alexis and Krystle Carrington to shame!

Alayah wins….and no one is happy. She gets a crown and the chance to make out with Peter.

The girls pick on Alayah and truthfully, it is kind of juvenile and high school-ish.

Peter mingles with the girls and Sydney tattles on Alayah about being fake. Peter then tells the girls that they should be real….or leave the show altogether. He is right, but still, it was wrong of him to tell Sydney to call people out.

Alayah talks to Peter, but does more crying than anything else. Argh. This is pathetic. They are ALL being pathetic and dumb.

Sydney gets the rose.

POOL PARTY TIME! The rose ceremony will happen right after, so there will be no cocktail party.

Peter talks to Sydney, who tells him to really look at what is going on. This is her being strong? Really?

Alayah is still angry and says nobody is questioning her realness…..but they tell Peter she acts different on camera. Okay, but, like, aren’t these girls doing the same thing? How is she different?

This all goes on for wayyyyyyy too long. Jeez and crackers!

We then go to Peter mingling and making out with the other girls. Then more with the Alayah drama! ::headdesk:: Now she wanted to lie about knowing Victoria P? WTF?

Victoria P, Sydney and Victoria F all have roses.

Madison: Girl who met the parents.

Shiann: Girl who called out Hannah Ann night one.

Peter takes a break…..because he is confused about Alayah.

Chris takes away a rose and says only one more will be given out.

Alayah, Alexa, Sarah and Jasmine go home….but Peter wonders if he made a mistake.