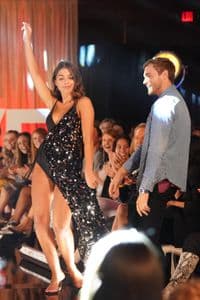 The Bachelor continues with Peter Weber talking to Hannah Brown about their relationship and where to go from here. He asked her to become part of the house last week, despite the fact that this was filmed the same time she did Dancing With The Stars.

The gist: He seems to still have feelings for her and she cries that she thinks she messed up by letting him go. They cuddle a bit and she wants them to catch a flight. However, he says he can’t do this and they hug goodbye.

The other girls are confused and unhappy about the whole situation and honestly, who can blame them at this point?

Peter is confused and cancels the first part of the date. However, he then makes out with girls at the cocktail party, so I guess he wasn’t THAT confused or broken up over everything? He also claims Hannah is history, so…there’s that.

Seriously, that is the whole date. Sydney gets the rose.

Pre-rose ceremony cocktail party! Peter tells the other girls Hannah was at the group date, but he moved on….really, really no kidding, he really means it this time….he is over her.

The only noteworthy moment of the party (other than the mingling and making out) is ChampagneGate. What happened was, Kelsey had a bottle of champagne she wanted to drink with Peter, Hannah Ann ended up with it and opened it with Peter. Kelsey gets angry, the girls fight and there is a lot of unnecessary crying and drama.

Oh, and Peter gives Madison a picture from their date.

Kelley, Madison and Sydney have roses.

Sarah—Seriously? Who ARE these people?

Payton, Courtney and Lauren are sent home….whomever they may be.

Group date! Lexi, Deandra, Victoria F, Hannah Ann, MyKenna, Alexa and Natasha are on this date, which is a fashion show judged by Carson Kressley and Janice Dickinson. It is for the clothing line Revolve and the winner gets a ton of new clothes.

At the party, Victoria whines to Peter and they make out.

Victoria gets the rose.

Hannah Ann and Kelsey continue to fight and get Peter involved,because of course they do. He talks to Kelsey about Hannah Ann’s accusations of bullying and Kelsey says it isn’t true. Peter is confused and isn’t sure what to do or which girl is telling the truth.