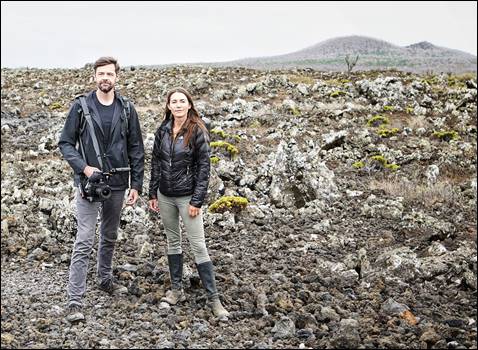 In each one-hour episode, filmmaker and explorer J.J. Kelley and journalist Kinga Philipps retrace the harrowing steps of adventurers whose journeys took an unexpected turn for the worse. Picking up where the official investigation has ended, the duo sets off on foot to follow the path they believe will lead them to answers, interviewing witnesses and locals along the way. From trekking deep in the Amazon jungle in search of idealists looking for a lost city to climbing a treacherous mountain in Africa where dozens have vanished, the duo combine their wilderness and sleuthing skills to navigate their way toward the truth. Confronted with risky and uncertain situations, they test their own limits to investigate missed clues and new evidence behind these baffling cases.

“I’ve spent my life documenting the underbelly of the world, and the truth is always a few layers deep,” said Kelley. “The answers to these stories may lie far off the beaten path, in a place where others didn’t think – or dare – to look before. And that’s where Kinga and I are headed.”

“As a journalist and avid explorer, I readily dive headfirst into uncharted territory and take the unmarked road in order to reach new grounds,” notes Philipps. “Between our investigative nature, wilderness expertise and relentless determination, J.J. and I will go as far as we can to find closure.”

In the series premiere, Kelley and Philipps journey deep into the Panamanian jungle to solve the mystery of what happened to Lisanne Froon and Kris Kremers, two young Dutch women who disappeared on a hiking trail in 2014. Braving torrential rains and impenetrable darkness, they venture off the map in search of answers—following in the women’s footsteps and matching their photos and phone records as they go. They find and attempt to cross the perilous cable bridge the Panamanian government says the women fell from and speak with the indigenous couple who discovered Lisanne’s backpack in a small local village. Finally, their investigation culminates in an exclusive, explosive interview with a forensic pathologist, and the evidence he shares blows the lid off the “official” story.

Kinga Philipps and J.J. Kelley follow in the footsteps of three adventurers who went missing while searching for the fabled city of Akakor. Trekking deep in the Amazon jungle, they consult a local tribe about the existence of Akakor and its mysterious people. The pair discovers an abandoned village apparently overrun by vicious predators and examine the scene of a crime that still remains unsolved. In an exclusive first, they interrogate the man at the center of it all – an enigmatic tour guide named Tatunca Nara, who claims to be Akakor’s chieftain.

Kinga Philipps and J.J. Kelley investigate the disappearances of Tom Young and Keith Reinhard – two men who disappeared mere months apart in the same mountains above Silver Plume, Colorado. Was it just coincidence? Could they have been victims of a vicious animal attack or a serial killer? Or could they actually have stumbled upon a darker secret – important enough to kill for? The pair consults local law enforcement, friends of the missing and a psychic medium for answers.

Kinga Philipps and J.J. Kelley investigate the mysterious disappearance of adventurer and social media star Justin Alexander, who in 2016 ventured into India’s fabled “Valley of Death” and never returned. The pair attempts to track down Justin’s porter, who may be the only person alive that knows what really happened to him. They uncover a never-released recording that challenges the official narrative and secure an interview with a holy man who reveals shocking information about Justin’s guide. Ultimately, they confront a terrible truth about how one man’s zest for life may have led him to his untimely death.

“Lost in the Wild” is produced by Ping Pong Productions for Travel Channel. For Ping Pong Productions, the executive producers are Brea Tisdale, Casey Brumels and Brad Kuhlman. For Travel Channel, the executive producer is Daniel A. Schwartz, Julie Meisner Eagle is vice president of production and development, Matthew Butler is general manager and Henry Schleiff is group president of Investigation Discovery, Travel Channel, American Heroes Channel and Destination America.

ABOUT J.J. KELLEY AND KINGA PHILIPPS

J.J. Kelley is an Emmy-nominated filmmaker, producer, director and explorer focusing on issues of conservation and wildlife crime. His documentaries have been featured on the cover of National Geographic Magazine three times and he has served as a producer and correspondent for National Geographic’s “Explorer” series, where he led countless expeditions. An avid adventurer, Kelley is an Appalachian Trail Thru-hiker, has paddled from Alaska to Seattle in a homemade kayak, biked the length of Alaska to the Arctic Ocean and journeyed the full length of India’s Ganges River. A fellow at the Explorers Club, Kelley’s travels have instilled a sense of protecting the planet, and he brings a unique mix of humor and grit to subjects he investigates. Kelley was awarded the Conservation Achievement for Media and Film Award from TUSK, Best Conservation Film at the Jackson Hole Wildlife Film Festival and Best Short Film at the Blue Ocean Film Festival. Kelley’s work has appeared in The New York Times, Outside, National Geographic Channel, NOVA, Discovery Channels, PBS and more. He currently resides in Brooklyn, New York.

Kinga Philipps is a veteran journalist, writer, producer and travel expert. Born in Warsaw, Poland, Philipps grew up in a family of explorers and adventurers. Philipps began her career as an on-air correspondent for the Emmy Award-winning Current TV and went on to co-host and produce a variety of travel-adventure series for SyFy, National Geographic and EPIX. She has traveled the world reporting on intense subjects like police corruption in Mexico, gangs in Los Angeles, women in the sex trade, world conflict, natural disasters, humanitarian and environmental causes. She has also hosted programs for Travel Channel including “The Wild Side with Kinga Philipps,” “The Trip,” “Travel Hacks,” and “The Real.” Philipps has tested her limits diving, spear fishing, surfing, skydiving, spelunking and swimming with sharks. She regularly writes for a variety of travel-related columns, and her work has appeared in Travel + Leisure, Martha Stewart Weddings and Reader’s Digest. Philipps is a member of the prestigious Explorers Club and is an avid diver with a passion for the ocean. She sits on the board of nonprofit organizations Shark Allies and Now Art LA and is an ambassador for the Waves for Water organization. She is based in Malibu, California.

For the bold, daring and spontaneous; those adventurers who embrace the thrill of the unexpected; those risk-takers who aren’t afraid of a little mystery; if you’re up for anything, down for whatever, and above all, love great stories, journey on to Travel Channel. We’re more than you expect and everything you didn’t know you were looking for. Reaching more than 82 million U.S. cable homes, Travel Channel is the world’s leading travel media brand. Fans also can visit  for more information or interact with other fans through Facebook, Twitter, Pinterest and Instagram. Travel Channel is owned by Discovery, Inc., a global leader in real life entertainment spanning 220 countries and territories, whose portfolio also includes Discovery Channel, HGTV, Food Network, TLC, Investigation Discovery and OWN: Oprah Winfrey Network.