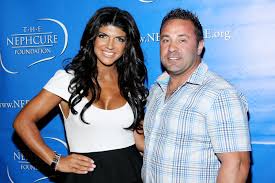 Real Housewives of New Jersey stars Teresa Giudice and her husband Joe announced their separation after 20 years of marriage. Below is their statement, courtesy of People:

The Real Housewives of New Jersey stars “have been separated,” a source close to the family tells PEOPLE exclusively.

“They discussed their future when Teresa and the girls went to Italy in early November and they agreed that each had to move on. They are doing so amicably and very slowly,” the source says. “Joe has been out on a few dates, Teresa has not. She has been too busy with the girls, with work obligations and taking care of her father. She is happy for Joe . They have been very friendly with one another and are very supportive of each other’s happiness. They still love one another, but as Teresa told Andy Cohen on the WWHL special, they are separated by the Atlantic Ocean. Neither is interested in a long distance relationship.”