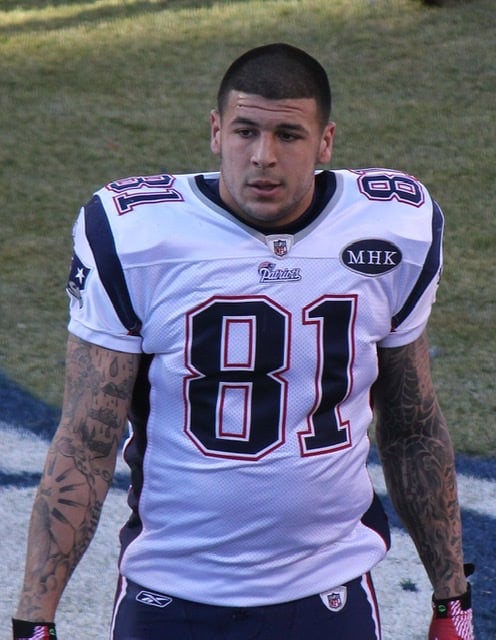 The story of Aaron Hernandez is one of the most stunning falls from grace in recent history. Once hailed as a hero for the New England Patriots, Hernandez is now viewed as an American tragedy. After beginning a promising NFL career at the young age of 20, Hernandez was thrown into the limelight. But few could ever imagine that a three short years later, he would be on trial, convicted of murder. Football and sports fans alike were perplexed as to how a professional football player with a growing family and promising career could resort to such violence off the field. But as the investigation unfolded and his story unraveled, more unknown factors were brought to the forefront. The public was exposed to the dangerous innerworkings of Hernandez’s psyche, seeing the anger, secrets and struggles that simmered beneath the All-American façade. Now, for the first time, Investigation Discovery (ID) explores how Hernandez went from professional football player to violent killer in AARON HERNANDEZ: AN ID MURDER MYSTERY premiering Monday, January 20 at 9/8c.

“The case of Aaron Hernandez is, perhaps, one of the most stunning and perplexing criminal stories of this century,” said Henry Schleiff, Group President of Investigation Discovery, Travel Channel, American Heroes Channel and Destination America. “Hernandez was in all ways, America’s golden boy, but this tragic case proves that no amount of money or fame can hide the true nature of a person.”

This latest installment of ID’s MURDER MYSTERY franchise delves into the multiple murder investigations connected to Aaron Hernandez, taking a closer look at the motivations behind these killings and examining the fear and devastation he left in his wake. The accusations begin with the murder of Odin Lloyd, and quickly expand to a second investigation into the double-homicide of Daniel de Abreu and Safiro Furtado and end with the alleged shooting of Alexander Bradley. As more accusations unfold, this special examines the larger questions behind these acts of violence. Was Hernandez acting out of unexplainable malice? Or were more deep-seated impulses at play? The special answers these questions and more through poignant, one-on-one interviews with those closest to the case, including an exclusive interview with Aaron’s childhood friend Dennis Sansoucie, who provides valuable insight into Aaron’s formative years and the secrets that Aaron shielded in his final days. With never-before-heard details and heart-wrenching interviews, AARON HERNANDEZ: AN ID MURDER MYSTERY shows that even when they have it all, the mighty are always able to fall.