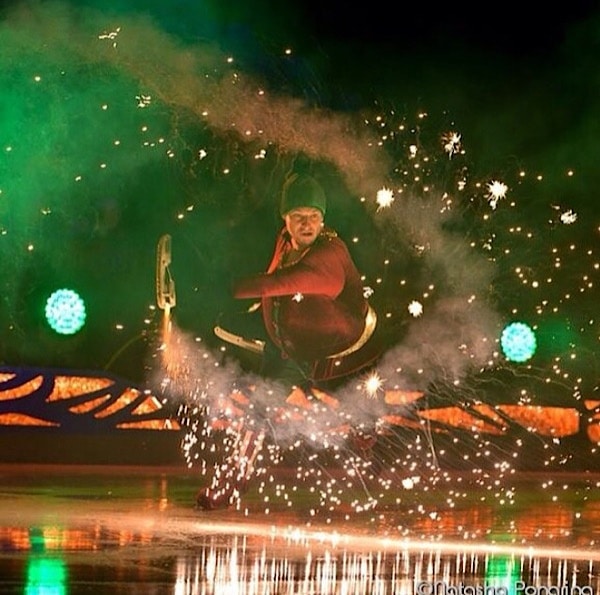 He’s the founder of Skate Universal and created this company as skating is his passion and he wants to share it with the world. By sharing his devotion and knowledge of the sport, he hopes to improve skaters of ever level in their performance, technique, understanding, and love of the sport.

Originally from Lithuania, was a coach in the Chicago area for about 8 years. Now he’s a southern California who has a thriving coaching practice there.  Being a world competitor and professional coach has allowed him opportunities to travel around the world. He’s had the chance to learn and share many different training techniques at seminars, camps, and shows. As a personal trainer and a skater, has the unique ability to incorporate the two disciplines for optimal benefit of the skater.

In addition to being the founder of Skate Universal, he’s the inventor and creator of the Powertwist, for all levels of skaters, which teaches them correct positioning during jumps, landing positions and spins while also strengthening the shoulders, arms, abdominals and core muscles. This is such a powerful and helpful too, that it even helps tennis players build explosive power and upper body control.

Tell me about yourself and career.
My last name is Reklys and it sounds like Reckless and I love living that way… in a positive Reckless style😁 I love trying new things in life, I’d love to work in new fields like the film industry or fashion, and event planning industries;  anywhere where there are good vibes and I can create great lifetime memories.
As for my career, in the past, it was about my skating career. I was an 8 time National Champion, 7 time World competitor, and a Fair Play Award winner. I missed the Olympics by one point. I did the best I could in environment where I was. If I was in the US, however, I know I could do much much better. But I’m thankful for my past and remember it fondly.  Who knows who I’d become if I had everything I wanted and I’m very happy with my present situation, so it all turned out great.
What projects are you working on now?
I am continuously working on new projects. Five years ago, I created a sportswear line called the  “Reklys Collection.” I loved creating it! I created this line for athletes and people with active lifestyles. I have a lot of unique designs and the clothes are so comfortable! I invented a training tool for skaters called the “Power Twist.” It helps to build rotational speed and upper body strength. I also made one for tennis players as well. It’s so exciting to create products for better athletic performance!
What attracted you to them?
I like help to athletes or people with active lifestyles reach their goals faster using training tools that’s why I invented this product, tested it with Olympic level coaches and put it on the market. Currently 56 countries around the world use it. I’m very thankful and happy that it works very well and is helping so many people.  👐
As for my sportswear line, it’s sold at stores internationally. It’s a very competitive field and many options are out there for customers in the marketplace, but I’m happy that people like my line and it’s growing steadily each year. Someday I would like to create unique designs for big companies like Adidas or others.
What do you hope fans like about it?
Best to probably ask them what they like, but I guess they like all the styles in my line and how effective the “Power twist is,” because every year we moving up with sales with both companies. Big thanks to all my fans, supporters and loyal customers. 🙌
What are some memorable moments from your career?
At the closing ceremony for the “Fair Play” Award, and we were outside in the stadium with all this snow and and some lady I don’t know comes up to me, says my name, grabs my arm and stops. At that time my English wasn’t very good. I’m not perfect now either 😁 Anyway, nobody from my team told me about this. I guess they kept it as a surprise, so I tell my team and they told me to go with her 🤔🤔🤔 She takes me to the stage and mind you it was snowing, with lights and hosts talking on microphones. it all looked so beautiful, but I was a little bit stressed understandably as she’s a perfect stranger! 😁Finally when they called my name, the lady from earlier told me to go to the two hosts and they gave me this incredible award. I waved my hand to the crowd, bowed my head by saying thank you and all my stress went away. Nowadays, I smile about all this.
What was the biggest challenge?
My biggest challenge was when I finished my career and was thinking about what I want to do in life, but I was open minded and life guided me to where I am now and it still does, only now I’m more open to things. Now everything is not about money. It was challenging to produce my first gala skating show as it was in a big arena and was lot of work. It turned out nicely though and I still do that but now smaller and more private events and celebrations.
What would be your dream project?
It would probably would be a fun challenge for myself to work as an actor. That would spice up life! I was acting all these years but on ice😁Of course, I love working on the ice and coaching, but as I mentioned in the beginning of this interview, I like trying new things, I’m enjoying working not only with figure skaters but also with hockey players. Maybe some day I’ll start working with NHL teams and help them with power skating.
Who are some people you would like to work with?
I like people who have goals, who push themselves hard to accomplish their goals and bring good vibes. In any field where I’ll have opportunities to work with famous actors or singers or a corporation who want to create events.
What else are you working on?
I love completing a project before talking, so when it’s done, then I’ll definitely let you know 😁
What is a fun fact that would surprise fans?
I love doing anything that gives me an adrenaline rush! I love riding unique sports cars, especially old classic cars. I own one as well. It’s a 1965 Shelby Cobra. Additionally, when I was kid I loved Bruce Lee movies, and I was so inspired by him, I was trying to do what he was did, and that required all kinds of stretching and crazy hard pushups 😁
What are you watching on tv these days?
I work a lot, so I don’t watch much TV, but I love watching movies or sports and I love to go to concerts.
Anything else you want to tell America?
Best wishes and let’s all lift each other up!