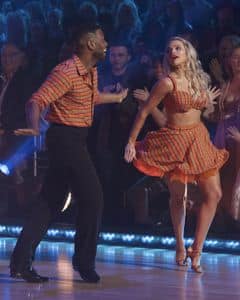 It is the eighth episode of Season 28 of ABC’s Dancing With The Stars. Tonight is Dance Off night for the top seven  dancers. Tom Bergeron and Erin Andrews host, with Len Goodman, Carrie Ann Inaba and Bruno Tonioli judging.

Fans can vote by phone, online or by text….live.

The judges will have a chance to save a bottom two couple.

Time to dance! We get an epic group number before we get down to business.

Sammi: I love how he wants to do jazz hands. Lindsay cannot perform due to the death of her mother in law, so Jenna is stepping in. As for the dance, it is cute, but they didn’t need the extra performers. He is definitely a hard worker and it is obvious he is having a blast.

My condolences to Lindsay and her husband.

Len: He says he didn’t have the proper feet, but enjoys and respects his effort.

Bruno: Dory from Finding Nemo has better direction, but he respects his resilience.

Carrie Ann: She thinks there is a sameness to his dance, but tonight he brought something new with Jenna.

Sammi: It was adorable and fun. It was a bit off but she enjoyed it and gave it everything she had. She continues to amaze me.

Bruno: He points out some mistakes, but overall he enjoyed it.

Carrie Ann: She was strong and confident and loves what she is doing despite her setback.

Len: He hopes she stays despite her mistakes.

Claim to Fame: All That/Kenyan and Kel

Sammi: Again, why the extra dancers? So annoying. Kel is such a good dancer and tonight he really brought it again. He was fun, fiery and just exciting to watch. The other dancers were so not necessary.

Carrie Ann: She loves the way he moved.

Len: He was large and in charge.

Bruno: He was the main attraction.

Sammi: WOW. She nailed it and was incredible from start to finish. There is nothing else to say.

Len: She had a good mix of technique and high performance.

Bruno: He thinks she had it all in there.

Carrie Ann: She is a freaking superstar.

Sammi: Seeing her family was the medicine she needed to make her into the superstar she is meant to be. WOW. She just gave everyone what for! I also love the song choice.

Bruno: He loved it.

Carrie Ann: She hugs her and says this is what’s she is talking about. The comeback of the season.

Len: It was a fabulous dance.

Claim to Fame: The Office

Sammi: It’s a cute dance and very fun, and I think her sister will be very proud. It was full of emotion, giving it something extra.

Carrie Ann: She thinks her sister would be proud.

Len: He thinks it was a joyful dance.

Bruno: It was charming..

Sammi: His parents are so cute. I don’t like this version of Don’t Stop Believing but the dance is gorgeous and my favorite of the night.

Len: It was like a good book with a happy ending.

Bruno: It was flawless.

Carrie Ann: It was an amazing lift and she could feel the breeze and the artistry in motion.

James and Emma have immunity because of having the highest cumulative scores and get two extra points. However, they can still end up in the bottom two.

Kel and Witney vs. Ally and Sasha

Sean and Jenna vs. Kate and Pasha

Hannah and Alan vs. Lauren and Gleb

Results: Sean and Lindsay/Jenna, Hannah and Alan, James and Emma, Kel and Witney and Lauren and Gleb are safe, while Kate and Pasha and Ally and Sasha are in the bottom two.

Kate and Pasha are eliminated.