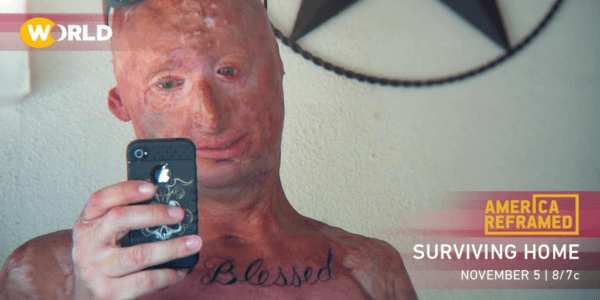 Surviving Home, a film aiming to start a dialogue between civilians and veterans about military life and what vets face when they return home is coming to WORLD Channel and worldchannel.org on Tuesday, November 5 (in honor of Veterans Day). The film highlights the stories of veterans from different wars who have taken different paths on the way toward healing and adjusting to life after combat.

From Tracey Cooper-Harris, a female LGBTQ military pioneer who fights through the effects of military sexual trauma and post-traumatic stress to wage a landmark civil rights battle against the U.S. government with the hope of securing veterans’ spousal benefits for same sex couples, to Claude AnShin Thomas, a Vietnam War veteran whose own struggles lead him to become a Zen Buddhist monk now working with other vets to help them cope with their post-traumatic stress, to Bobby Henline, a veteran who suffered severe burns from an I.E.D. during combat and now uses stand-up comedy as a way to help heal physical and emotional wounds, the documentary brings the stories of veterans adjusting to life after military duty to the small screen.

Directed by L.A.-based filmmakers Matthew Moul and Jillian Moul, Surviving Home will be available for audiences nationwide when the film premieres on Tuesday, November 5 at 8 p.m. ET on WORLD Channel and worldchannel.org as the season finale of America ReFramed, the award-winning public television series from WORLD Channel and American Documentary, Inc. Following the premiere, the film will continue streaming for one month on worldchannel.org, amdoc.org and all station-branded PBS platforms including PBS.org and on PBS apps for iOS, Android, Roku, Apple TV, Amazon Fire and Chromecast