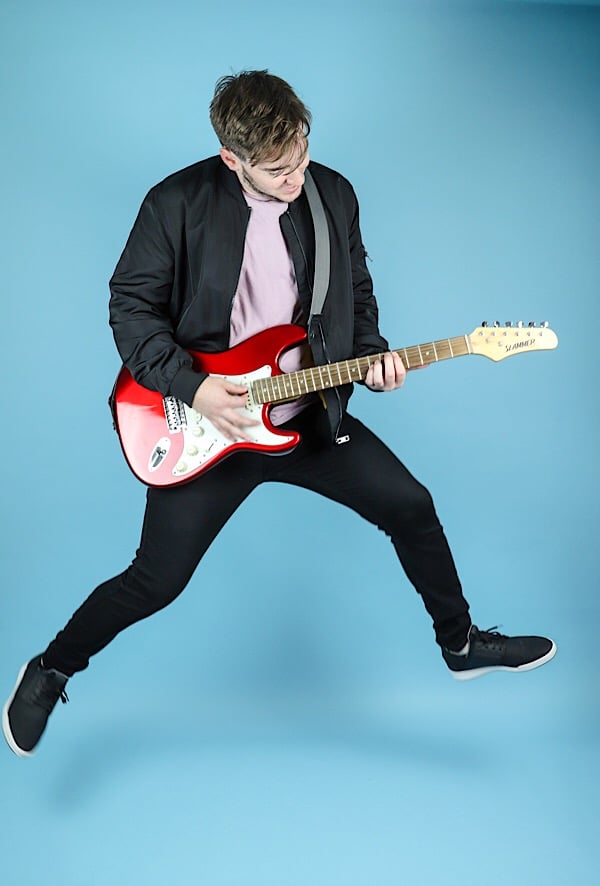 -Tell me a bit about how your career began.
Growing up, I was a kid who was able to pick up an instrument rather fast. I started off with taking piano lessons in 3rd grade and began to recreate Christmas music and other simple pieces. Only three months after taking lessons I decided to participate in my school’s talent show where I performed some of these songs I was able to quickly learn. Being able to see the parents reactions when I was finished made me crave that excitement and rush of performing infant of others more. Later on I began taking guitar lessons in 6th grade. After a few years of being able to recreate a vast number of songs, my dad came into my room one day and said, “That’s great you can play these songs, but you want to be playing your music and not someone else’s the rest of your life.” It definitely sparked this fire in me to start working on original music. By 10th grade I decided to perform at the high school’s talent show with playing acoustic guitar and singing in front of people for the first time. I never told anyone/sung in front of people other than my parents before, so it was definitely nerve-racking to say the least. People were not expecting me to be able to sing when I came on the stage and it felt good so good when they were coming up to me afterwards freaking out. After many people began encouraging to keep singing, I decided that this is the path I was going to begin taking and I haven’t looked back since.
-Who inspires you as an artist?
Around Freshman year of high school was the time that I discovered Muse and their album The Resistance. When I listened to that album the first time, it really blew me away their ability to create an original sound for every album that they do to this day. All of their instruments are so complex with different melodies that it truly inspires and pushes me to create more in depth music. But other than them, definitely All Time Low, Mayday Parade, and The Killers are bands I always go back to when I start writing music.
–Tell me about working on Wake Up Call and what inspired it.
I wanted to push myself from my previous EP Puzzles as each song has its own story that I can easily remember the moment it happened. Each song on the EP aren’t just fixations, they’re all real life moments that have happened and these feelings I’ve felt over the course of about a year and a half. I’m so proud of this EP as I’ve tried to take the next steps in my songwriting and overall sound. Having Rian Dawson of All Time Low be producer for the EP definitely helped with his input and talent. Working with him at first was 100% intimidating as he is someone I’ve always looked up to with him being in one of my favorite bands. However, we were able to work efficiently while having a great time. The whole process was a ton of fun and fast as we recorded the five songs in seven days.
–Who are some people you want to collaborate with?
Oh boy, there are a lot of people I dream about wanting to collaborate with. If I had it my way, I definitely would love to do a song with Brendan Urie. He’s just such a likable guy and easily one of the best singers out there today. I’d totally be okay singing one line if it meant being on a song with him. Others I’d want to try and collaborate with would be Hayley Williams, Matt Bellamy from Muse or the guys of 5 Seconds of Summer.
–What’s next for you?
I just want to perform as much as I can moving forward. I have a couple gigs lined up over the next two months but I definitely want more and to expose my music for anyone I can. Not only that, I’ve always wanted to put out as much video content out there. I plan on doing vlogs for YouTube and Instagram TV so anyone can feel like they are a part of the journey when they can’t make a show. Not only that, I will be uploading more acoustic covers of other artists as well as acoustic versions of my music. Plus, any time I have, I’m usually trying to write new music for any future projects.
–Tell me a surprising, fun fact about yourself.
My friends and family can attest to this, but I’m a person who LOVES to whistle. I can add vibrato to it as well which tends to lead to anyone around me either politely or angrily telling me to shut my mouth.
–What are you watching on TV these days?
Honestly, I don’t watch a ton of TV unless it’s sports related! I do always find myself rewatching Friends or Two and A Half Men whenever it is on though. Those two shows are definitely up there for some of my favorites.
.
–Anything else you want  to tell America?
Just to please keep on listening to the new EP! I know that if heard by the right people, that it could be something truly special.