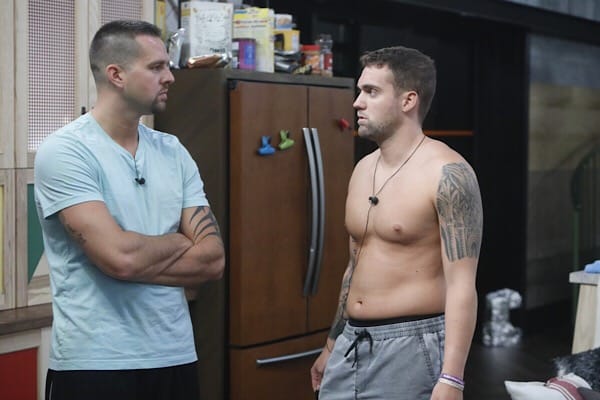 Welcome to the next live eviction on CBS’s Big Brother. Tonight either Sam or Kathryn will go home, causing shifts and rifts in the house and with alliances.

After we see the POV nomination ceremony, we get to Sam and Kathryn rallying to stay in the house. Analyse says she will be sad to see Sam go. He feels secure that he has her vote, but wants more reassurance.

Meanwhile Kathryn goes to talk to Holly and throws Christie and Tommy under the bus, hoping to turn her against her alliance. Analyse does the same thing, and they begin to wonder what Christie’s real plan is.

Cliff and Christie plan to break up the power couples and plan to win more comps in order to help make this happen.

Oh, and that poison ivy punishment is over.

Sam pleads his case to Michie and says Christie is after him and Jack. This does not sit well with Michie at all, so he tells Holly they should save Sam. Unfortunately, she wants to save Kathryn. She now regrets her nomination choices because of everything coming out about Christie.

We see Tommy teach everyone how to dace before getting to the eviction. Kathryn and Sam plead their cases before people vote. As an aside, Kathryn spoke so fast I was reminded of Six from Blossom!

In a unanimous vote, SAM is evicted from the Big Brother house.  He says goodbye and talks to Julie about his time in the house.

HOH competition. They must answer questions based on camp ads they observe.

However, we will find out who won on Sunday.

The Bachelor Presents: Listen to Your Heart Winners Announced