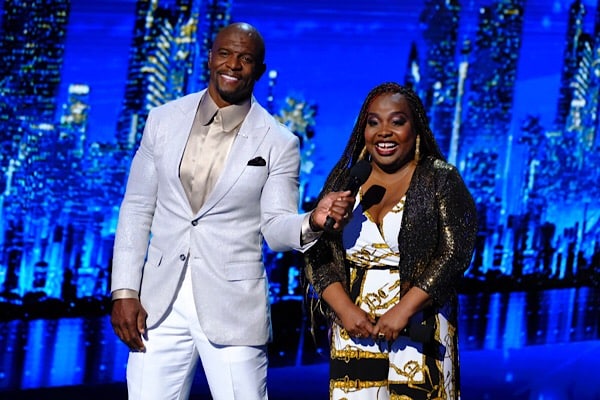 Tonight is the third round of live shows on NBC’s America’s Got Talent. Twelve acts will perform and tomorrow, seven will move to the next round. Julianne Hough, Howie Mandel, Simon Cowell and Gabrielle Union judge, Terry Crews hosts.

This was Terry’s Golden Buzzer act. They do a remix of Carrie Underwood’s ‘Champion’ and it is quite good. It was a great way to start off the evening and I am hoping that people remember this act when they vote.

Simon thinks it was a step up from their previous performance. Everyone is on their feet for them. Julianne thinks they are great together and bigger than AGT. Howie and Gabrielle are thrilled with how well they did.

This is done to Blink 182’s All The Small Things. It is not only a fun, cute act, but it is a throwback to my childhood. It is sad that this show is his last hurrah because the pup is getting too old to perform.

The guys don’t see anything new, but the ladies love it. However, Simon does think Falco did better in the act than Lukas.

He uses videos of AGT alum and changes his clothes for his performance. I am a bit confused to what exactly he is doing,but I can’t stop watching. He is fun, quirky and adorable! I think he may have a shot of getting pretty far.

The judges all love it and say he makes people believe in magic.

He does another original song and proves what a powerhouse he is at such a young age. We also get a clip of him singing the National Anthem at the Mariners game. He has quite the talent for such a young person.

Julianne thinks this is what we have all been waiting for, while everyone else agrees that he has a great future ahead of him.

His act is….entertaining to say the least. I am not sure how it will do in Vegas, but at least he is having fun? I honestly am not sure as to what is going on with this

Simon buzzes him, but the others found it entertaining.

OMG, what an entertaining act! Never mind his music, which is his own, but the way he plays!! I am in awe watching him and will be shocked if he doesn’t make it to the next round.

Simon thinks he is one of the most talented contestants ever and the others think he is a rock star.

I’m glad magic is being represented this season. Julianne helps him as he makes Rubik Cubes out of M&Ms and switches them back and forth. It is clever, cute and fun to watch. I hope he collaborates with Dom at some point, that would be amazing to watch.

The judges are going crazy with this act and think he is incredible.

They somehow incorporate opera and classical into this act. However, they add their own spin to it, making it unique and mesmerizing. I have never seen anything like this before and wouldn’t mind seeing more!

Gabrielle thinks they killed it. Simon and Julianne were impressed, but hopes that the rest of America agrees. Howie was also impressed.

He is tonight’s wildcard act. He has had two major injuries, but that doesn’t seem to slow him down. There is flying and glitter and moves that make me wonder how he can do this. It also makes me very aware that I need to get to the gym and stop eating junk so I can at least be in better shape and more limber. Holy cow, that was amazing.

Simon buzzes him and tells him he won’t go any further in his opinion, but Julianne argues with him that it was a great act. Howie and Gabrielle agree with Julianne.

He is a good singer and has a nice voice, but after these other acts it is hard to get into it. I feel bad though, because he owes have the talent. I worry that he is going to get lost in the shuffle. I do have to compliment his song choice (Life on Mars by David Bowie) because it is a difficult, risky song to sing, especially in a competition like this.

The judges agree he has the talent, but wonder if it is enough. They say America needs to vote.

Okay, I need to be best friends with this woman. she is fun, sassy and overall amazing. She takes on dating for her act tonight and girl, I can so relate for parts of this. She seems like she would be a fun act to watch in Vegas and then gossip with over a few cosmos at the casinos.

The judges find her ‘fabulous’ and hope America puts her through.

This is Jay Leno’s Golden Buzzer act. She reminds me a bit of Jackie Evancho with her youth and talent. It is a great way to end the night and I hope it is enough to keep her in the competition. I’m not usually an opera fan, but acts like this make me feel otherwise.

The judges are on their feet cheering for her. They love her so much that Julianne calls her an icon for ten year olds. Simon declares he will eat the table if she does not make it through.