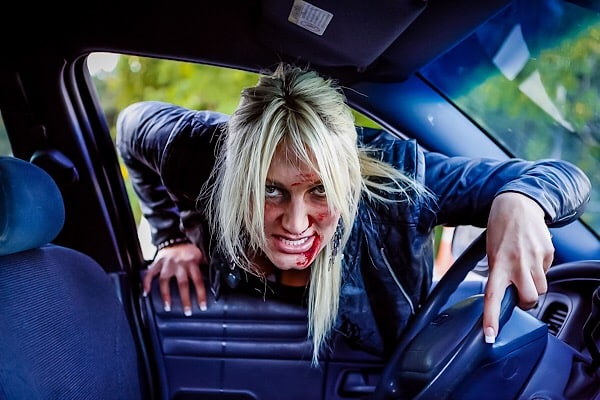 My name is Scott Hallock. I’m a writer, executive producer, director, and co-creator of “Scare Tactics.” I’ve definitely put in my 10,000 hours in the hidden camera world. In addition to “Scare Tactics,” I’m best known for co-creating “Howie Do It” with Howie Mandel for NBC, and running “Betty White’s Off Their Rockers” for NBC. Fooling people for a living does have some drawbacks… for my kids. They can’t get away with anything because I know almost all the tricks in the book.

How would you describe Scare Tactics?

Scare Tactics is a comedic hidden camera series with a horror movie/psychological thriller twist. The show takes advantage of the age-old practice of friends playing practical jokes on each other. “Boo” is one of the oldest tricks in the book. We like to think of Scare Tactics as “Boo” with a budget. Anyone can hide behind a door and startle a pal. But how many people get the chance to scare their friends with aliens, vampires, and Bigfoot? At its core, Scare Tactics is a comedy show, so Tracy Morgan is the perfect host.

How are you involved?

I get to work with an incredible team on every aspect of the show. From the original kernel of a prank idea through casting, shooting, and final delivery, I love every part of it. And I’ve had the honor of overseeing the final edit of every episode from doing the final pass on every prank, to cutting the show to time, to the audio mix, to the final color correction. I’ve seen every frame of all 119 episodes more times than I can count.

What were some challenges for working on the show?

The biggest challenge for Scare Tactics is getting people to believe the unbelievable. An incredible amount of credit goes to our team, including writers, directors, art department, casting, and actors. We have to tell a crazy story so convincingly that our victim won’t doubt for a second that Bigfoot is ACTUALLY right outside. It also means believing in ourselves when the prank doesn’t go well the first time. We shoot each prank multiple times. If it doesn’t work the first time, sometimes it just means it wasn’t right for the person we were trying to prank. So we have to resist to urge to make too many adjustments. We just gotta believe in what we’re trying to do and try, try again.

What are some memorable moments?

There have been too many memorable moments to count! I would say any time we work with Gabriel Pimentel, an actor who is 2 feet, 10 inches tall, we get something memorable. He’s been a Rat Monster, Satan’s Baby, even an evil Garden Gnome. Gabe is a talented tiny man, and for some reason he has a gift for freaking people out. Fan fact: Gabe played the panda that fights with Ben Stiller in “Tropic Thunder!” I also love the fact that many of our actors have gone on to star in shows with even bigger audiences, like: Lauren Ash (Superstore), Eric Stonestreet (Modern Family), Sarah Colonna (Insatiable), Jerry Lambert (American Housewife), Dot-Marie Jones (Glee)

I really hope people enjoy the story telling, the comedy, and the good-natured “friends pranking friends” aspect of Scare Tactics. One of the things I think viewers enjoy the most is trying to imagine themselves in these outrageous situations. We’ve actually pranked people who were fans of our show and thought they would never fall for the ridiculous B.S. we pull. But, sure enough, they fall hard. And everyone always has a good laugh in the end.

I am incredibly blessed to have an amazing slate of shows that include a huge network reality competition show, a couple of hidden camera shows, and a couple of comedy shows with some major comedic talent. The curse is that I can’t talk about ANY of them until the networks give me the OK.

I have danced professionally on a television show wearing nothing but a tutu and a Carmen Miranda fruit hat. I’ve also been a photographer for Hustler magazine – but not for the kind of pictures you might think. It was a comedy feature. Oh, and fresh out of college, I was a writer on the New Mickey Mouse Club for a cast that included Keri Russell, Christina Aguilera, Ryan Gosling, Justin Timberlake, and Britney Spears. (Sorry, that was more than one “fun fact”)

The Women’s World Cup! The U.S. Women’s team is so inspiring and fun to watch. The Carbonaro Effect and Impractical Jokers are always solid entertainment. Also, Modern Family, black-ish, I’m Sorry, Crashing, and Saturday Night Live. I feel like MSNBC is on more often than ESPN these days. I’m also enjoying Songland. The way they cover the creative process of songwriting is fascinating.

“Scare Tactics” is coming to Netflix June 29 (aka midnight Friday!) with an all-new take on episodes hosted by Tracy Morgan: For the first time in Scare Tactics history, these episodes will be available UNCENSORED – just as the “showbiz gods” intended.