What is Into The Dark?

Its this really cool anthology show on Hulu that Blumhouse makes.  Each episode is a stand alone genre feature.  I’ve directed two of them at this point.

How did you get involved?

I’ve written a couple of things for the Blumhouse guys with my writing partner Simon Boyes.  They called me in for a general and asked if I’d be interested in maybe directing one of the episodes, but I had to read a script and let them know that same day.

That was I’m Just F**king With You… and it led to the most crazy seven or eight months of madness.

What was the most challenging part about it?

The most challenging thing was trying to make two of these things at the same time!  The movies are so incredibly different, it literally made my brain hurt having to shift between the two projects multiple times a day.  It was a once in a lifetime opportunity and I loved every moment of it!

What was the most memorable moment of working on the project?

For me the most amazing thing was watching the actors come together.  They had such a unique bond in real life and I feel like that really translated to the screen.  I was very proud of the work they all did, they were all so phenomenal and made my life very easy.  I knew the movie would live or die on their performances and I couldn’t have been more blessed to have got them.

How would you describe They Come Knocking?

I’d call it a post modern horror movie about the terrifying nature of grief.

How are you involved?

What are some of your favorite parts of being a part of the project?

The whole thing was an insane enterprise.  Trying to make something this ambitious in 16 days with kids, a limited budget, and the elements were so challenging it was like this crazy jigsaw puzzle that I honestly didn’t think was possible.  But somehow this fabulous crew and amazing cast helped make it all into this really beautiful movie that I’m immeasurably proud of.

I also got to continue working with Marshall Persinger who was the producer on I’m Just Fucking With You, and They Come Knocking.  She’s just a force of nature and I couldn’t have done it without her.  I learnt so much from her and I’ll always be indebted to her for what she brought to the two movies.

Another highlight for me was getting to work with Jimmy Lavalle whose just the most extraordinary composer.  The score he did for this movie I’d put up against anything ever!  I think he’s a genius.  Actually I know he is.  I’m a huge fan of this band The Album Leaf, and it was pretty amazing to get to work with him.

What is next for you?

I’m doing a movie with a band called Alice In Chainscalled Black Antenna that I’ve been working on for the past year.  Then I’m going to take some time off!

I’m colorblind and pretty much deaf in one ear.  Only one of those things is true.

Not really.  Thanks so much for checking out the movie and your great questions. 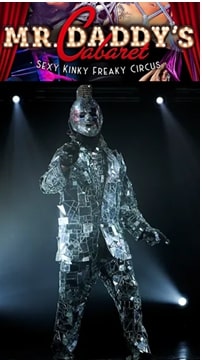