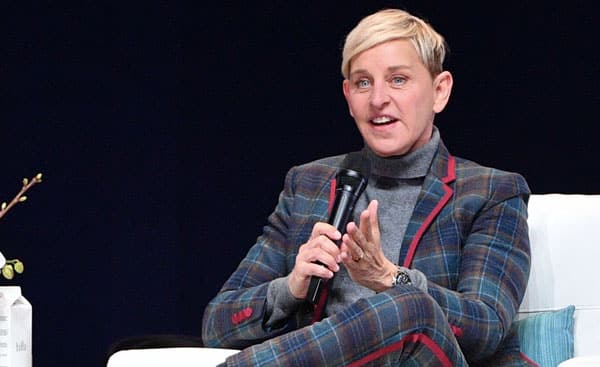 Talk show host Ellen DeGeneres is taking on a new gig as executive producer for several projects for the Discovery Channel. See below for more details.

Discovery Channel is bringing the brilliantly enigmatic world and the wonderful creatures who inhabit it to audiences with three epic series and a ground-breaking documentary in 2019 and 2020. From an intimate look at the people who dedicate their lives to conserving wildlife on the brink of extinction, to chronicling the everyday stories of wildlife that show us first-hand how they are more like humans than we think, these innovative stories are sure to amaze and inspire.

“We are going back to our roots to what our audiences crave – jaw-dropping, never-seen-before images of what makes our world so special,” states Nancy Daniels, Chief Brand Officer, Discovery & Factual. “Discovery is at its best when unlocking secrets and potentially rewriting history.”

“More than 27,000 species are threatened with extinction. Some are well-known animals, some aren’t, but all are important to our ecosystem. It is an honor to be part of the team shedding light on the people who work to save our wildlife friends,” says Emmy®-winning TV host Ellen DeGeneres, executive producer of WILDLIFE WARRIORS (w/t).

“We all know that Planet Earth is a unique place. It is the right size, orbiting the right distance from the right kind of star, it spins at the right speed, it tilts at just the right angle and it has a single, decent sized moon. By sheer luck, it is the only planet right now which has the perfect conditions for life,” explains Alastair Fothergill, executive producer of PERFECT PLANET (w/t).

“Solving nature’s mysteries takes us on some amazing journeys. In this series, we don’t only go to some of the most spectacular places, we see those landscapes change over millions of years and we see how life is shaped by those great changes,” says Andrew Murray, MYSTERIOUS PLANET (w/t) series producer. “What I’m really excited about is how this gives us a whole fresh take on the Natural World!’

“Of all the shows I have created or worked on, nothing compares to Serengeti,” says Simon Fuller, producer of SERENGETI. “The heartfelt stories, the intensity of the drama and the depth of emotion is something I have been genuinely moved by. The genius of John Downer capturing the most personal and extraordinary moments from these beautiful animals’ lives is truly awe-inspiring. I am also proud to have Discovery and the BBC as the best possible partners for such an important television event.”

All of these special presentations will be part of UNDISCOVERED – a new banner that will take viewers to the bottom of the oceans to the peaks of Mt. Everest and beyond.

WILDLIFE WARRIORS (w/t), previously announced as The Red List) follows the effort of dedicated wildlife conservationists across the globe, as they work to compile the latest version of The Red List – the most comprehensive record of the state of the world’s wildlife that has ever been created. The Red List, run by the International Union for the Conservation of Nature, is more than just a list – it’s a barometer of life. WILDLIFE WARRIORS (w/t) is BBC Studios Natural History Unit’s first non-BBC commission.

From Emmy® and Bafta-winning executive producer Alastair Fothergill and series producer Huw Cordey, PERFECT PLANET (w/t) takes a completely fresh look at life on our precious Planet Earth. Using state of the art satellite imagery, this five-part series will showcase how the forces of nature – weather, ocean, currents, volcanoes and sunlight – shape the incredible variety of life on Earth. In doing so, it will reveal how animals are perfectly adapted to whatever the environment throws at them.

MYSTERIOUS PLANET (w/t) is an epic journey to the ends of the earth to unlock the greatest mysteries behind the world’s most incredible species. The revolutionary series takes audiences to five extraordinary places highlighting the many charismatic creatures in each location. From the lush forests of Indonesia to the arid Andean deserts, from the Caribbean to the highlands of Ethiopia, each episode embarks on an adventure through time and space to reveal how the beautiful spot came to be and why certain wildlife exist only in these remarkable places on our planet.

With unrivaled access to one of the most pristine and unspoiled corners of the African plains,SERENGETI is a groundbreaking series that follows the heartwarming stories of a cast of African wildlife over the course of a year, showcasing the dramatic moments that make each day of survival on the Serengeti a feat. Emmy®-winners Simon Fuller and John Downer have worked together on Serengeti for several years, employing innovative filming techniques in some of Africa’s most treasured regions painting the ultimate portrait of survival in SERENGETI. Narrated by Oscar®-winner Lupita Nyong’o and set to the backdrop of original music, this television experience combines Africa’s unimaginable beauty with its equally unforgiving brutality, highlighting daily challenges of life on the Serengeti – such as a lioness trying to provide for her small cubs after being exiled from her pride – and witness firsthand how the animal experience isn’t so different from our own. The series is created and produced by Simon Fuller. John Downer is the director and producer.

PERFECT PLANET (w/t) is made by Silverback Films for Discovery Channel and the BBC, co-produced with Tencent Penguin Pictures and France Télévisions. The executive producer is Alastair Fothergill, and the series producer is Huw Cordey. It was commissioned by Charlotte Moore, BBC Director of Content, and Tom McDonald, Head of Commissioning, Natural History and Specialist Factual. For Discovery Channel, Howard Swartz is executive producer.

SERENGETI (w/t) is produced by XIX Entertainment and John Downer Productions for Discovery Channel and internationally distributed by BBC Studios. This series is created and produced by Simon Fuller; John Downer is director and producer. The series commissioned for BBC TV by Tom McDonald, Head of Commissioning, Natural History and Specialist Factual. For Discovery Channel, Howard Swartz is executive producer.