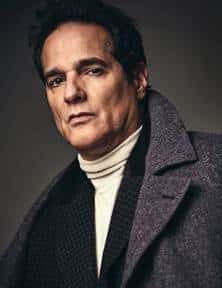 Yul Vazquez is the true definition of gentleman. He is kind, sweet and has the ability of making everyone he meets feel like family. From the moment I talked to him,I felt as if I had made a friend for life with his gentle demeanor and engaging personality.

He is also one of the busiest men in Hollywood, with a talent that has him on his way to becoming the next Denzel Washington. He has been seen in Russian Doll, Narcos: Mexico, I Am The Night and is currently filming The Outsider in Atlanta. Each role is dramatic, yet very different from one another showing his range and talent. He has something special that many actors take a lifetime to achieve…the kind of talent that makes you truly believe he is the character he is playing. It is something so rare, yet so incredible to see unfold in each project.

However, that is not the best thing about Yul. While he has a talent that is making him a member of the Hollywood elite, he has something even more special that allows him to rise head and shoulders above the rest. He has the kind of heart and kindness that is rare to see in this world. He spoke very highly of his costars in every project and is veer appreciative of every opportunity he has been given.

He also treated me with the upmost respect during our interview, not only making me feel like an equal, but as if I was his friend. He was humorous and respectful throughout the entire call and made me feel as if we had been friends for years. It is this kind of person that is what will make the future brighter and the world a better place.