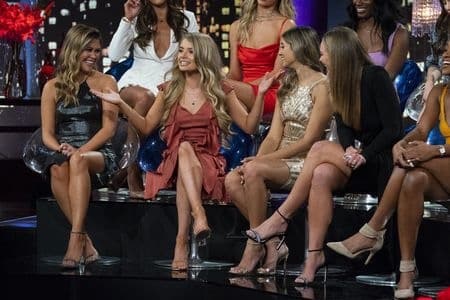 Tonight is the Women Tell All episode of ABC’s The Bachelor. All. The rejected women will reunite to face each other and Colton for the first time in front of a live studio audience.

After a quick reminder about Colton’s fence jump and speculation on his virginity, we are told to tune in next week to see what happened. Then we get down to business.

The returning women are: Tahzjuan, Bri, Alex B., Jane, Alex D,Nina, Angelique, Tracy, Caitlin, Katie, Catherine, Nicole, Sydney, Heather, Onyeka, Hannah B., Kirpa, Demi, and Caelynn. Thank you Reality Steve for the advanced notice as to who would be on.

We see breakups and breakdowns from past seasons and I’m sad to say I’ve seen every single one of these moments. No, not really. I have ZERO shame. This show is my guilty pleasure.

The girls then share their feelings on Colton’s fence jump. The consensus is they get it and don’t blame him for leaving if he really did love Cassie.

Chris Harrison then asks the girls about their impressions on Colton. Hannah B says she thought he was hot, Demi was turned on by the fact that he was a virgin….and the sloth says she likes to take things slow.

We see more highlights from the season and then get into the biggest drama of the season, Courtney and Demi, followed closely by the Catherine drama on night one.

However, that is even put on hold so we can hear Oneyka and Nicole fight. Some of the girls actually defend Oneyka, but Sydney says she caused a lot of noise and drama. All the girls end up in the middle of it and think Nicole wasn’t bullied,but causing drama. It gets so out of hand that Chris has to tell them to talk one at a time…and ends up ending the fight. For now….

We then get into the whole thing about some of the girls not being there for the right reasons. Caelynn says Katie threw everyone under the bus and Katie admits that Caelynn and Cassie taking about winning and being the Bachelorette. Caelynn says that she and Cassie were best friends and that they decided if one of them ends up with Colton they hope the other is the Bachelorette. Katie says Caelynn said something similar on the phone. This leads to more fighting and everyone talking over each other. Kirpa also gives her two cents and says she told Colton about what is going on in Denver.

Hannah B and Caelynn say they are good and support one another.

We then get into Demi’s drama and the Cougar Club debacle. Tracy defends herself and says Demi was being immature. Courtney echoes her sentiments, causing Demi to fight back. Demi even reminds her that she encouraged Courtney to talk to Colton, causing Courtney to tell her she never stops running her mouth. She also attacks her for the cancer of the house comment. Demi apologizes and says she is like the bed bugs of the house. Courtney shoves a pacifier in Demi’s mouth and tells her she needs a time out. Demi threatens to call security.

Demi is in the hot seat. We get a recap of her time on the show and she admits to being promiscuous. All righty then. She also says she is fun and bold,but not immature. The girls question this and she continues to defend herself and says she was there to marry Colton. She also talks about her mom and says she was scared to tell anyone. However, she is glad she did and it is alluded that she is going on Bachelor In Paradise.

Nicole gets the next hot seat and we get a recap of her time on the show…and crown her the new Ashley I when it comes to crying. She admits she is emotional and the show environment didn’t help. She also talks about wanting to make her family proud, especially her twin brother who is autistic. She also gets a years supply of Halo Top ice cream…so…yay?

We then see Colton eating ice cream in the shower. Everyone then gets ice cream.

Hannah B gets her time in the hot seat, as well as her own montage. She says watching it back is a bag of mixed emotions. She also admits she feels pressure to be perfect and has a hard time opening up. She redoes her birthday toast and that is that.

Caelynn gets the hot seat and montage next. She is still crying over it and says she felt a connection and was really in love. She wants to know what happened and what changed. She is shaking over confronting him later. Chris mentions her rape story and says she touched so many people. Demi even gives her a standing ovation.

Colton comes out and admits he is nervous about seeing the girls again. Demi appreciates his honesty and then introduces him to Courtney, who still has nothing to say.

Caelynn wants to know what changed and what went wrong. He says the rose ceremony was the hardest and the safety is something he valued and appreciated. He wished he could have given her closure and hits wayyyyy too close to home.

Hannah B was also shocked to go home and thinks he has the right to do what is best for him. She hopes they are cool.

Colton thinks he could have done things better and apologized if he hurt anyone.

Sydney asks if he is a virgin and they make garden references to sex. We don’t get an answer. However, we get a bit into the fence jump. Colton says he was frustrated and confused.

We get some bloopers and a preview for next week. Stay tuned!