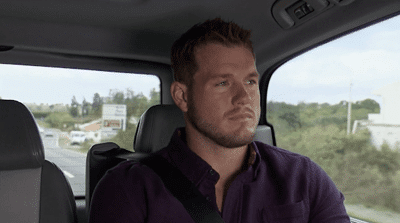 Tonight is part one of The Bachelor finale on ABC. When we last left Colton, Cassie broke his heart and he jumped over the fence, heartbroken and done with the whole situation. Chris Harrison went after him, whistling as if he were calling for Marmaduke, but Colton was already long gone.

Tonight, we open with Chris showing us a recap of the season, as well as wondering what happened after the jump. Will Colton leave heartbroken? Will he lose is virginity? Will he say forget Cassie and go after love with one of the other girls Bachelorette Desiree style?

Did we really need another recap though? Hearts got broken and he is still a virgin. I just saved you all ten minutes of your life.

I love how Chris finds the fence jump hilarious and then walks through it, you know, like a normal person. Where the hell did Colton go? Is he wearing a freaking invisibility cloak? Nobody knows where he is and they think they will have to call the cops if they can’t find them.

They found him and are acting like this is an episode of Cops and not The Bachelor. The dude just had his heart shattered! Give him sometime to be alone and regroup.

He tells Chris he can’t do this and he is heartbroken. Chris says he is sorry and lets him leave in a car.

Chris says we won’t believe what happens next. Well, unless one of them becomes a Men In Black alien or someone uses the memory eraser from that movie, someone is getting their heart broken…again.

Chris and Colton talk about what happened and it is heartbreaking. Cassie completes him and now he is Jerry freaking Maguire.

Colton goes to visit Tayshia and tells her it is over. However,she is incredible and he respects her too much to let it go further. She cares more about his feelings than her own heartbreak and it makes me respect her even more. She is honest about her heartbreak,but she cares enough about him to let him go. What a class act.

Chris interviews her in the studio and she says it was difficult to see that moment again. She admits she was in love with him and she wasn’t ready to see it end. She talks about comforting him a bit and then she sees Colton again. They talk abut and it seems Ike they have a beautiful friendship.

Meanwhile, Hannah G is oblivious to everything and waiting for her date with Colton,not knowing he is going to end it all. He comes to see her and lets her know it is over and he loves Cassie. She has no clue how to react. He still says he reminds her of home and she cannot believe this is happening. She is in tears,he cuddles with her and tells her she doesn’t deserve to be a backup plan. I give him props for that, but I don’t see how cuddling with her while breaking up with her is at all helpful.

Who in blue blazes is this random chick who hugged Colton?

Hannah recaps everything to Chris and I’m sure as heck not repeating it. She was hurt, blindsided and heartbroken. That is the gist of it. However, she says love is a two way street and no longer in love with him.

When Colton comes back she pulls the same ‘why’ speech Caelynn gave him and he has really nothing useful to say except she didn’t deserve to be a backup plan. They go back and forth and I’m having flashbacks to past relationships, so I am NOPING out of the rest of this BS. Basciallly he loves Cassie and didn’t want to lead anyone else on. Hannah basically OWNS him by saying that what Cassie did to him was what he did to her. She is right, but right now I no longer care because this whole episode was a waste of time. Colton ended up alone at this point and is still a virgin.

Now we have Jason, Garrett, Ben H and Blake on to talk about the last few days and how stressful they are. Jimmy crack corn, and I don’t care. Basically, there is a lot of stress with the waiting, the emotions and feelings. Why we had to waste ten minutes on this is beyond me. Why we even needed this segment is further beyond me. This wasn’t a let’s relate to Colton story. This was a lets waste more time story. This was a big WHO CARES story. This was a why the hell even tell it in the first place story!

Now Colton is back still mooning over Cassie. You know when they tell girls when a guy is just not that into them? Colton needs to hear that about Cassie.

Cassie misses him, but thinks she made the right choice. She cannot make a commitment right now, nor can she handle the pressure,which makes me wonder why in the name of sweet justice she was on this show in the first place. She did know she could be the last one standing, right?

Also, is she still in Portugal? She is packing her things,so I am confused? Did she dump him and then get another few days there for free?

Now Colton is talking about how he needs to fight for her and as someone with experience in this, I understand. Granted, in my case it blew up in my face,but maybe Colton will have better luck when he visits her at her hotel room and asks for a second chance.

We will find out tomorrow if she takes him back and if he loses his virginity. Apparently it is truly shocking. We will also find out the identity of the new Bachelorette. Stay tuned.