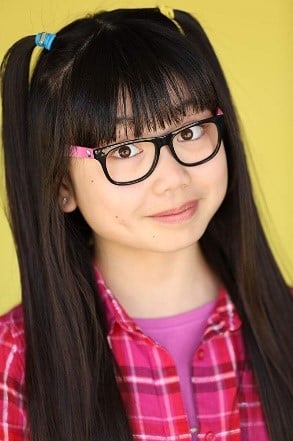 Hi! My name is Thalia Tran.  I live in California with my two amazing parents and the best little sister in the world.  I’ve always been interested in the arts.  I’ve been singing for as long as I can remember.  I’ve played the piano since I was six years old, and I also play guitar.  When I have some free time, I would love to start learning the drums and devote more time to music composition which is something else that I enjoy.  As for my career, I am so fortunate to have filmed the feature film Little last summer.  Everyone involved in the project was incredibly talented, passionate, and kind, and the two months of filming in Atlanta flew by.  It was an unforgettable experience.  Currently, I am working on an NBC drama pilot called Council of Dads.  Not only do we have a phenomenal script, but we also have a wonderful cast and crew who work unbelievably hard to bring the scenes to life.  I am so grateful to be a part of these projects, and I can’t wait for the world to see the product of all our hard work.

Tell me about your new project, LITTLE.

Little is about a business woman named Jordan Sanders.  She has become wealthy and powerful, but she is also selfish and condescending.  One morning, she finds herself trapped in the body of her thirteen year-old self.  She is now forced to attend school, and this is where she meets my character, Raina, and my friends, Isaac and Devon.  We are part of the “Friend Zone”, a group full of students who have been socially ostracized for various reasons.  My character in particular was humiliated for wearing unfashionable clothes to school.  After that incident, Raina was categorized as an outcast.  Jordan tries to teach Raina, Isaac, and Devon how to be cool by acting and dressing differently, but through these experiences, Jordan learns a lot about embracing her individuality and herself.

What attracted me to Little was the message.  The film reminds the audience to choose love and kindness even when faced with adversity.  It encourages everyone to always stay true to themselves.  I’m so grateful and happy to play Raina because I get to not only entertain the audience, but also promote positive messages to the world.

I hope audiences are able to find Little both inspirational and hilarious.  First of all, the concept and premise of Little all came from the imagination of the incredible Marsai Martin.  I believe that this is extremely empowering for young artists and creators.  It reinforces the idea that youth does not have to be a limit, and this is truly inspiring.  I also hope that audiences will find Little to be a delightful dose of humor and fun.  Having Marsai as one of the creative minds and executive producers behind the movie, Little is able to tell its story through a new perspective.  It’s rare for someone as young as Marsai to have such creative power in the filmmaking process, but I think this is what is so refreshing about Little.  This is what differentiates Little from other movies.

There were so many memories that were made during the filming process.  One of the highlights for me was filming the dance scene.  We rehearsed the dance in a dance studio, but it was so different when we filmed the dance on the actual stage with an actual audience.  I could feel the positive energy radiating from everyone.  We all worked together so well, and it truly felt like family.  When Raina, Isaac, Devon, and Little Jordan take on the stage together, it is not only a triumphant moment but also a playful one.  It’s a fun and lighthearted dance, but what makes the scene so incredible is the sense of unity and joy among everyone.  I think a lot of people, especially those around my age, will love the scene because they are familiar with the dance moves.  This is a climactic moment in the story, and it’s full of pure joy.

There weren’t any complications in the filming process that stood out to me.  Mainly, I just had to remember to stay focused.  There are so many distractions when you are filming.  When you are on set, you want to hang out with everyone, and when you are on hold, you want to just relax.  However, you must have the discipline to consistently work on your script, and you must try to perform your best each and every day.  Being surrounded by people who are so passionate about their work, it inspired me to work equally as hard.

I’m currently working on Council of Dads, an NBC drama pilot based on Bruce Feiler’s bestselling novel.  It’s about a father, Scott Perry, who is diagnosed with cancer, so he gathers his close friends to become a father figure for his children in case he doesn’t survive.  I play Charlotte Perry, his adopted daughter who is struggling to figure out who she is.  The script is so beautiful and powerful.  It tells the story of how all of us cope with the devastating news of the cancer diagnosis while simultaneously struggling with the other challenges of our lives, challenges that are magnified by the prospect of losing Scott.  I truly believe that this project is something that is so necessary in today’s world.

Something that not everyone may know about me is that I actually did not start out in acting.  My first love was music.  My parents always tell me stories about how I used to hum myself to sleep as a baby.  From there, my love for music only grew.  I sang anywhere and everywhere, and to this day, I still do the same.  I began taking vocal lessons, and shortly thereafter, I started piano and guitar lessons as well.  I then discovered music composition as a wonderful way to express myself.  I had been taking vocal lessons for a while when my vocal coach recommended that I take acting lessons.  He said that it would be a great way to improve my performance skills.  I signed up for a lesson just to try it out, and I simply fell in love with acting.    When I look back, it’s astounding to see how far I’ve come, and when I think about the future, it’s exciting to think about all the possibilities.  I could not be more thankful for all the opportunities I’ve been given and for all the lessons I’ve learned along the way.

Between filming, schooling, and juggling about a million other things, I haven’t had much downtime, so my list of TV shows to watch just keeps getting longer.  I started watching a few episodes of The Good Place, and I loved the concept of the show.  I definitely want to continue watching that.  Some other TV shows that I intend to catch up on soon are This is Us and The Umbrella Academy.  One of these days I just want to relax, turn on the TV, maybe make some popcorn, and binge-watch all of these shows.

I cannot wait for the world to finally see what we’ve been working on.  I hope everyone will find something to love about Little.  There is so much love and hard work that went into creating the movie.  Little will be in theaters April 12, so make sure to watch it!