SANTA MONICA, Calif., March 4, 2019 – Amazon Studios, the Jonas Brothers, Philymack, and Federal Films, a division of Republic Records, today announced they will partner on an upcoming documentary about the Jonas Brothers, to premiere exclusively on Amazon Prime Video in more than 200 countries and territories.

“Our fans are the best in the world and have shared in our journey as the Jonas Brothers and us as individuals,” said the Jonas Brothers. “In releasing this documentary we wanted to make sure we partnered with an innovative platform, like Amazon, that could reach our fans around the world.”

“Amazon Prime Video is proud to be the exclusive home for a very personal, behind the scenes look at the Jonas Brothers as they reunite for this exciting tour” said Jennifer Salke, Head of Amazon Studios, “Experiencing the brothers back together again is the news that everyone hoped for and we can’t wait to share this intimate and compelling documentary special with all of our customers.”

Marking the band’s first original release in nearly six years, and debut under their new partnership with Republic Records, their highly anticipated comeback single “Sucker,” and accompanying music video, are out now. More details about the documentary, including a premiere date, will be announced later.

The preeminent male group of this century, Jonas Brothers opened the floodgates for a new era of titans in pop music. They earned three consecutive number one albums and sold out shows throughout three continents. Selling over 17 million-plus albums with over 1 billion streams worldwide, they’ve achieved dozens of platinum and gold certifications. Jonas Brothers notably received a GRAMMY® Award nomination in the category of “Best New Artist,” garnered “Breakthrough Artist” at the American Music Awards, won Billboard’s “Eventful Fans’” Choice Award for “Best Concert Tour of the Year,” and took home a Mexican Grammy, showcasing their international influence. The tremendous success of the band provided a launch pad for the successful and storied solo careers of Nick Jonas, Joe Jonas, and Kevin Jonas, who have kept loyal fans yearning for a reunion, until now.

Federal Films is a new division of Republic Records in strategic alliance with UMG’s Polygram Entertainment. 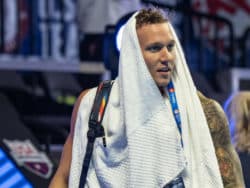