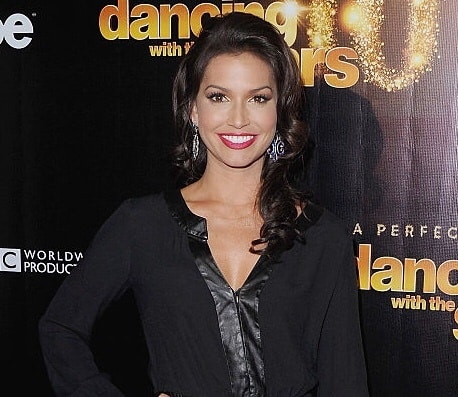 WEST HOLLYWOOD, CA - APRIL 21: Melissa Rycroft arrives at the 10th Anniversary Of "Dancing With The Stars" Party at Greystone Manor on April 21, 2015 in West Hollywood, California. (Photo by Jon Kopaloff/FilmMagic)

Melissa Rycroft is best known for being on Jason Mesnick’s season of The Bachelor in 2009. She went on to go on two seasons of Dancing With The Stars with pro Tony Dovolani (winning the All-Stars season!)and made a name for herself as an entertainment reporter. In between all of that, she got married and had three children.

The Logically Irrational co-host (her husband Tye Strickland does the show with her) recently took time to talk to me about all things Bachelor and how she balances her busy life. Below are some of the highlights from our chat.

1. Melissa’s favorite choice for the Bachelorette is Caelynn, who was eliminated after the hometown dates. She liked her from the beginning of the show and thinks she has an interesting story to tell. She added that it wi also be a unique season due to her past heartbreak with Colton and her past life situations.

2. At first, she wanted Cassie to win, but after watching the hometown date, she isn’t quite sure how she feels. She was intrigued by her family’s reaction to the situation and is curious to see if their reactions to Colton will impact Cassie’s feelings. She also feels like we don’t know the girls as well as we have in past seasons due to the drama so it s hard to tell who will actually win Colton’s heart.

3. Of course, Melissa has her own theories on the biggest mystery of the season….why does Colton jump fence? We have been teased with previews of the infamous fence jump for several weeks and it seems as if everyone has a different their as to why he decides to do it. Her theory is that he gets rejected and can’t handle it. She and her husband also wonder how the heck he got over that fence! They agree he must have some sort of amazing athleticism and agility to do the jump. N the first place.

4. Melissa is hard at work with several projects. She co-hosts the podcast with her husband, which covers everything from reality TV to relationships and other real life issues. She admits that she never knew how much work went into a podcast until she made her own, but she loves every minute of it. She is also a part of the CMT series DCC: Making The Team, which revolves around women vying for the chance to become a Dallas Cowboys Cheerleader. She was previously on the show as a cheerleader and now serves as a judge.

5. How does she balance it all? She says she tries to remain present in every moment. If she is at work, she puts her energy there and when she is with her family she makes sure she is there for them and gives them what they need. She owes every aspect of her life and would not want it any other way.

Keep coming back for more news on Melissa’s life and career!