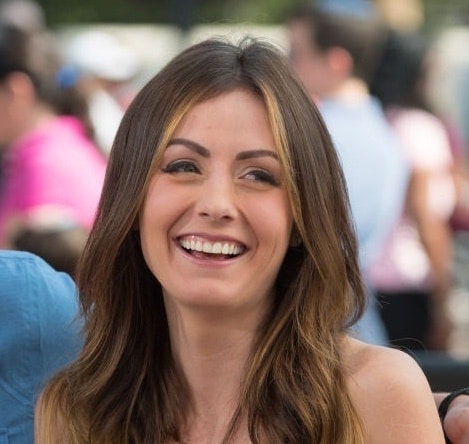 Carly Waddell is part of one of the greatest love stories on Bachelor Nation. She first attempted to find love on season nineteen of The Bachelor with Chris Soules. She went on to find love again on the second season of Bachelor in Paradise. She proved the third time was the charm on season three of BIP when she met her now husband Evan Bass.

Now the singer is mom to baby Bella and still watching the shows that eventually led to her own happily ever after. She recently  took time to chat with me about this season, revealing her favorite to win and who she thinks will be the new Bachelorette. Below are some of the highlights  from our chat.

1. The biggest question on her mind is the same as everyone else’s….when in the world will Colton jump the fence? During our discussion, we tried to figure out what could have happened to cause this dramatic moment.  While neither one of us is sure what could have happened (other than fear or rejection), we were even more impressed over the fact that he even jumped the fence at all. Carly even called it a Superman jump. Needless to say, she is very excited to see what will happen.

2.  Carly  thinks that at this point, Hannah G. is the one who will win Colton’s heart at the end. She has been a huge fan of hers since the beginning and loves her personality, especially when she rapped on her hometown date. She also thinks she is adorable and that she has great chemistry with Colton.

3. So who does she think should be the Bachelorette?  Her top two choices are Tayshia and Hannah B. She thinks both of them will bring something special to the table. She loves Tayshia’s personality and energy and thinks Hannah will be able to handle the men because she knows exactly what she wants.

4. In addition to being a wife and mommy, Carly is working on several projects with her former BIP costar/current BFF. Jade Roper. The two of them have a podcast, Babes and Babies, which discusses motherhood,  women’s issues and other fun topics.   The second season is set to begin within the next few weeks and the ladies look forward to tackling new topics and working with a new network. The two of them are also collaborating on a jewelry line.

5. Carly is also getting back to her singing roots. In honor of Bella’s first birthday, Carly came out with an album of lullabies.   The album features a mix of original and favorite music and can be found on iTunes.  All of the songs are ones Carly sang to Bella throughout her life and she is considering making one every year to honor her birthday. She is also considering coming out with a Christmas album in the future.