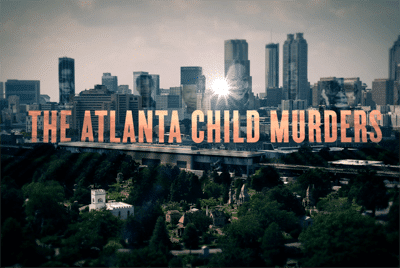 (New York, NY) – Today, the Atlanta Police Department announced the re-testing of 22 murder cases, previously known as part of The Atlanta Child Murders, which have been deemed cold cases since 1981. These cases, part of 29 murders of black youths between 1979 and 1981, are the subject of the upcoming documentary THE ATLANTA CHILD MURDERS, premiering this Saturday, 3/23 on Investigation Discovery.

Atlanta Mayor Keisha Lance Bottoms and Police Chief Erica Shields confirmed that technological advances in testing DNA evidence will be the main focus as the cases are reexamined. Police Chief Shields stated, “As law enforcement, we have an obligation to exhaust every conceivable avenue of investigation and make every effort to make sure these families receive closure.”

Mayor Keisha Lance Bottoms said, “It would certainly be in order for us to look once again at evidence that the city of Atlanta has in its possession…to once again take a fresh look at these cases and to determine once and for all if there’s additional evidence that may be tested that may give some peace – to the extent that peace can be had in a situation like this- to the victims’ families. To let them know that we have done all that we can do…to make sure their memories are not forgotten, and in the truest sense of the word to let the world know that black lives do matter.” She later stated, “I want to acknowledge and thank my friend Will Packer who is doing a documentary on the missing and murdered children.”

Produced by famed executive producer Will Packer, Investigation Discovery’s THE ATLANTA CHILD MURDERS, delves into the many theories surrounding this decades-old case, sparking new attention on the city of Atlanta and the conviction of Wayne Williams. In 1981 Williams was convicted of the murders of two adults in the Atlanta area. The judge allowed the prosecution to attribute ten additional victims to him, essentially putting Williams on trial for the entire Atlanta Child Murders case. To date a killer has never been tried for all 29 murders.

“We are thrilled that the Atlanta Police Department has decided to reexamine these cases, and we hope this moves the city one step closer to finding the closure that these families so desperately need and deserve,” said Henry Schleiff, Group President of Investigation Discovery, Travel Channel, American Heroes Channel, and Destination America.

Following the devastation of these 29 murders, the documentary  THE ATLANTA CHILD MURDERS showcases the theories surrounding this historic case. Tracing these tragedies from start to finish, THE ATLANTA CHILD MURDERS details the exhaustive investigations behind these killings, sharing how the impact of these cases still resonate in Atlanta, as well as across the nation.