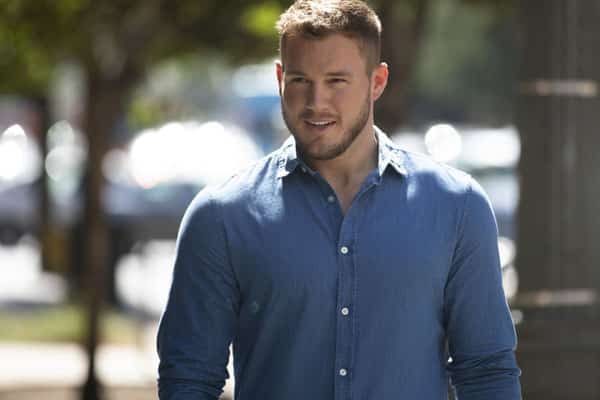 We are now on the fifth episode of ABC’s The Bachelor. Tonight, Colton Underwood will go on more dates, hand out more roses and break more hearts. We will also get to discover the beauty of a new country. ..Thailand!! et’s get started!

We open with the girls arriving and Colton showering outside. They gush over the resort and dream of their time with Colton.

Date 1: Heather gets the date with the clue..let’s experience something new. She is excited and thinks this might be the night she gets her first ever kiss. She is waayyyy excited over this and it is actually kind of cute. Since she has never really dated or kissed, I get why she is so excited.

They go on a boat and cuddle. The boat leaves them off to explore. The city is gorgeous and her excitement is contagious. They also share a meal as she anticipates that kiss.

However, before she possibly gets the kiss, they go to the beach and talk.

The talking continues through dinner and she finally gets her first kiss. Fireworks go off and all is right in the world.

She gushes about her date and while other girls are happy, Elyse is pissed.

Elyse is having a breakdown over the girls going on dates with Colton. Does she, um, not know how the show works? She compares her date with him to a romance novel, but then worries about what is going to happen next. She wants validation from him. I get that, but she is on a dating show, which seems more like a game show meet improv soap opera most of the time. He has to talk to the other girls and date them, and yes, even make out with them. I get she feels kind of crappy, but I am not sure what she was expecting? (I AM SO ADDICTED to this show!!!!)

Date 2: Katie, Demi, Caelynn, Hannah B, Sydney, Tayisha, Kirpa, Onyeka, Nicole, Hannah G and Elyse have the clue ‘will our love survive?’ Elyse is pissed. Cassie is happy because she has the second one on one.

However, Elyse goes to talk to Colton the night before the date. She says that she is struggling with this process and feels she is not getting enough attention. He is confused and thinks things are going well. He says the connection is there with them. She feels that something is off and it’s not that she is insecure, she just feels confused. He is just as confused and she ends up going home. She wants him to be happy and tearfully hugs him goodbye. She regrets the talk and doing this because she had no idea how he felt. She feels disgusted with herself and heartbroken.

Colton feels heartbroken and confused that she gave up on him. This is his worst nightmare.

However, he seems to be in better spirits on the date. It is some sort of survival game which has one of the Hannahs swallowing a bug whole. They split into teams to see who will survive the longest in the jungle. To tell you the truth, it is not that interesting and I kind of tune out.

After the survival drill, the teams have to show what they got. Demi and the Hannahs bring burgers and booze. I can’t say that isn’t creative.

Later on, Demi tells Colton three of the girls showered together, but not to get too excited.

Colton tells the girls that the Elyse situation made him open his eyes to his relationships with the other girls.

He takes time with each girl to talk and make out.

Apparently, Nicole said something to Elyse and Onyeka found out. Demi says she should tell him. As an aside, Demi’s dress is gorgeous.

Onyeka says Elyse said that Nicole said that she was looking for opportunities to leave Miami, which is why she went on the show. So….she is on the show to meet someone so she can start a new life…I honestly don’t see what the big deal is? Did she say she didn’t want to BE with Colton? She seems like she wanted to do something to change her life and find love, and if she left Miami, all the better.

Colton confronts Nicole, who denies it. Tayshia says that she was there and that is not what Nicole said at all. She just was taking an opportunity that could change her life. She takes Nicole aside to calm down. Onyeka rolls her eyes and calls Nicole a drama queen.

Hannah B. Gets the group date rose.

Date 3: Cassie’s clue is may our love be deeper than the sea. Basically, they are making out on the beach….and it is steamy. They are in the water, in the sand and it is enough to even make me kind of blush.

The kissing and making out continues through dinner. She does admit that she isn’t a virgin, and that is hard. She says people don’t know this about her and that it might be tough when she goes home because you know, SHE JUST ANNOUNCED IT ON NATIONAL TV!

He takes her into his bed and I guess the rest is left to our imaginations? She got the rose and his virginity? Maybe? We at least know she got the rose.

The girls at the house see the connection between Cassie and Colton and wonder what will happen on the date.

Cocktail party! He spends time with the girls one on one. There are wishing lanterns, flossing, talking and of course, lots of kissing. Demi also gives him trust rings, which….is weird. Ho-hum.

Nicole tries to explain things to Colton and while he tells her he believes her and knows she is a good person, he doesn’t seem to care. She then ruins things by tattling on Onyeka.

These girls are so immature and annoying. I’m so done. The fighting continues, the girls all roll their eyes watching and Colton storms off after trying to get the girls to calm down. I feel bad for the poor girl whose time was interrupted.