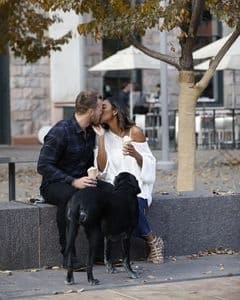 We are now on the eighth episode of ABC’s The Bachelor. Tonight, Colton Underwood will go on the hometown dates to meet the families of the remaining ladies. At the end of the episode, one girl will go home and the remaining three will go on next week’s fantasy dates.

We open with Colton getting ready to go on his date with Caelynn in Fredericksburg, Virginia. She takes him on a carriage ride to show him her favorite spots. She also tells him about her family and how her stepdad is the man she considers her dad.

They then go to meet her family at a cookout. Her dad seems overprotective,but in a sweet, endearing way. It’s very clear he doesn’t want his baby hurt.

Caelynn has a heart to heart with her sister,which is sweet. As an aside,they look so much alike….they also look a lot like their mom. Ariana (the sister) wants what is best for her and is still worried. She is also glad Colton took her revelation about the sexual assault as well as he did.

Colton gets grilled by Caelynn’s mom,who wonders if he is ready.

Caelynn’s dad wonders why the two of them can’t be friends, and Caelynn says she thinks this is her future. They share a beautiful moment where she says he is her dad,always has and always will be. There are tears everywhere.

Colton asks John (dad) for his blessing. John says he has to give a lifetime commitment and only then will he give his blessing.

The two watch some family movies and say goodbye.

Hannah G gets the second date in Birmingham, Alabama. She takes him to an etiquette class, which is hysterical. It reminds me of the Princess Diaries when Mia was learning how to be a princess. I can’t stop laughing at this….I legit howled when he said he has no time to rip pieces of bread and only knows how to eat the food.

They go to her house to eat and he gives a toast. Her mom seems offended by it, because Hannah was always hers. I don’t know why she was so offended?

Hannah talks to her cousins, who question if she can handle being with a virgin. She says it is a part of him and she is ok with it. She also talks to her mom and tells her he makes her feel safe.

Colton gets the ‘what are your intentions’ talk with her dad. He tells him he sees it working and wants his blessing. He gets the blessing and they hug.

The two of them talk about the night and finally say goodbye.

It is off to Corona Del Mar, California to meet Tayshia’s family. She surprises him with bungee jumping, which freaks him out. As he prepares to jump, he quips that he hasn’t even lost his virginity yet and now he is jumping out of a plane. He hopes he survives.

They go to see her family and enjoy a dinner. Her dad gives a speech about how he cannot bear to see his girl get hurt again. He takes Colton aside while she talks to her mom.

She tells her mom it is a whirlwind and she is happy. Her mom is worried,but glad to see her glowing.

Tayshia’s dad wants to make sure Colton is being sincere. He knows there are other girls and questions him about them. He also hopes he can be respectful and honest when it comes to making his decision. However, he thinks it’s a bit premature to give his blessing.

Colton also talks to Tayshia’s brother, who says he will hunt him down FBI style.

Tayshia also talks to her dad, who is still worried that this is going too fast. She says she is being positive and ready for what is next. He seems happy with this and gives his blessing.

The final date is in Huntington Beach, California for Cassie’s date. They go surfing and make out before they meet her family. They notice how affectionate they are together and are worried because they know he is involved with other girls.

The two of them tell her family about their adventures, but the family seems a bit skeptical.

Cassie talks to her sister about the potential of getting engaged and she says she is not quite there yet but can see it happening. Her sister wants her to be 1000% sure before she agrees to anything. She tells her dad the same thing. He trusts her, but wants her to be sure before making a choice.

Cassie’s mom questions Colton, who says he is falling in love with her. She tells him she can see them together, but that Cassie only goes into relationships she sees potential in.

Colton also talks to her dad and asks for his blessing. Cassie’s dad think it is premature to be giving it. Colton is disappointed in that….and the fact that she was the only one tonight to not say she is falling in love.

Rose ceremony! The girls are so nervous, as is Colton.

Hannah, Tayshia and Cassie all get roses. Caelynn is sent home. She tells Cassie she loves her and to go get engaged.

Colton tells Caelynn that he as at a loss for words. She is blindsided and feels like a fool. He holds her as she cries and walks her to the car.

She says in the car that she is shocked and that Colton fooled her. She says she allowed herself to feel that way and got hurt again.

The girls talk about the fantasy suites and wonder if one of them will take Colton’s virginity while Colton goes to talk to Chris.

Join us next week for a shocking two night event.Stay tuned!