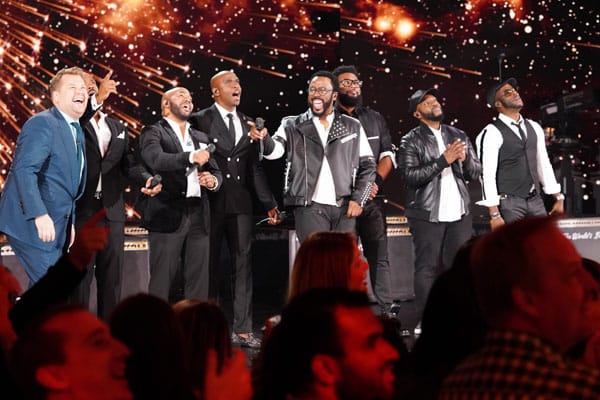 The World’s Best has been a runaway hit for CBS. The show made its debut after the Super Bowl and has been the talk around the water cooler ever since.

One of the stand out acts has been Naturally7, which is a musical act in which the members literally turn into musical instruments using their voices. It is a new spin on a paella music and one the world has not seen before….until now.

Roger Thomas, who is one of the members of the group, recently talked to TVGrapevine in an exclusive interview. Below are some of the highlights from our chat.

1. The group got together when they were church buddies in New York. Roger’s father was actually in the church’s choir, which inspired him to go. into music himself. He asked his buddies if they wanted to make music and the rest is history.

2. Roger knew they needed to do something to stand out, so they decided to try vocal play. This is when they use their voices to literally become an instrument. Their unique sound, which is usually done by soloists, makes them sound as if people are listening to a band. Everyone is shocked to find out that they are actually listening to people AS the instruments. He knows it is something nobody has ever seen from an a cappella group before and looks forward to sharing their gift with the world.

3. Roger, who uses his voice to become a keyboard, rapper and special effects guy, says that their music is a good mix of hip hop, beatboxing and jazz. He says each member of the group brings something different to the table, which helps them stand out even more. He says each member is a blessing and loves the music they make together.

4. Roger admits that the biggest challenge was to do an act in ninety seconds. The group is used to playing much longer shows, so it was hard to pick just one scene to use. However, they got amazing feedback from the judges and ok forward to showing more as time goes on.

5. The band is continuing to tour and make new music as well. They plan on hitting England next and hope that their newfound fame from the show helps them gain a new fan base. Roger says that this s a very interesting moment in their careers and looks forward to seeing what happens next.