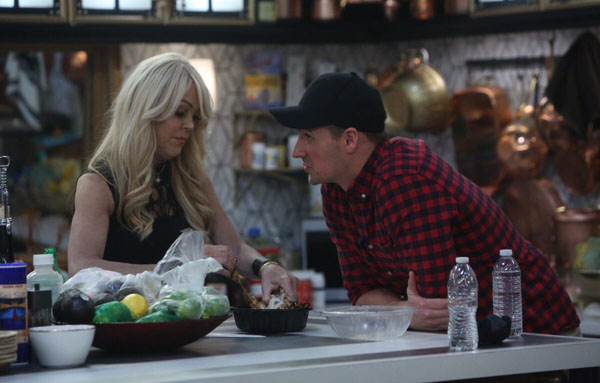 Ryan Lochte is angry his alliance lied to him. He now has to rethink his game. He hopes Joey Lawrence wins HOH because he can trust him. Joey jokes that Ryan put out the ‘Joey Bat Signal’ and that Gotham needs him.

Dina Lohan feels left out because nobody told her they were voting for Jonathan, while the rest of the house tries to figure out who voted for Kandi.

Everyone begins to figure out that Dina voted to keep Jonathan and the girls are suspicious that she is working with the boys. LoLo Jones says everyone is fired up and her alliance needs someone to win HOH.

The HOH competition has a rock star theme to it. They will be holding on to rocks while various things are thrown on them. The last one standing wins.

Tom Green and Ricky Williams are among the first to fall, along with Kandi Burruss. Tamar Braxton also falls, but not before she has an anxiety attack about the heights.

Kandi makes fun of Tamar for freaking out.

Natalie and Kato Kaelin are the last two standing and decide to let him win so she can be protected and go for HOH next week.

Kato is the new HOH and Ryan is worried about ending up on the block. He plans to do whatever he has to do in order to protect himself. He tries to talk to Kato, who wants to actually get rid of him because he is a threat.

The girls are worried because Kato told Joey he was safe. Natalie also admits Kato told her the same thing, which upsets Tamar.

Kato has Ricky ‘heal’ him and his colon. I don’t know or want to know what that is all about. All I know is when it is over, he has to poop.

Tamar cooks dinner, Kato cleans and talks to people in the house to decide who to put on the block. His plan is to put up Ryan (the biggest threat) and Tamar (the drama queen).

Dina and LoLo talk about the eviction. Dina is upset because she knew Kato lied to her about voting for Jonathan.

Tamar, LoLo and Natalie are in their room, preparing for bed. Tamar feels paranoid because she thinks the other two girls are planning something, while LoLo gets annoyed with her attitude.

All of a sudden, LoLo and Tamar get into a screaming match because LoLo feels like a punching bag. They end up cursing at each other until Kandi takes Tamar into the other room.

Tom checks on Tamar, who is packing and wanting go home. However, LoLo apologizes and says she should have handled it better. She wants to be friends and they hug it out.

Kato nominated Tamar and Dina because Dina went against him at the competition and because Tamar is not a team player. Both women are POed, to say the least. Kato plans to backdoor Ryan later.