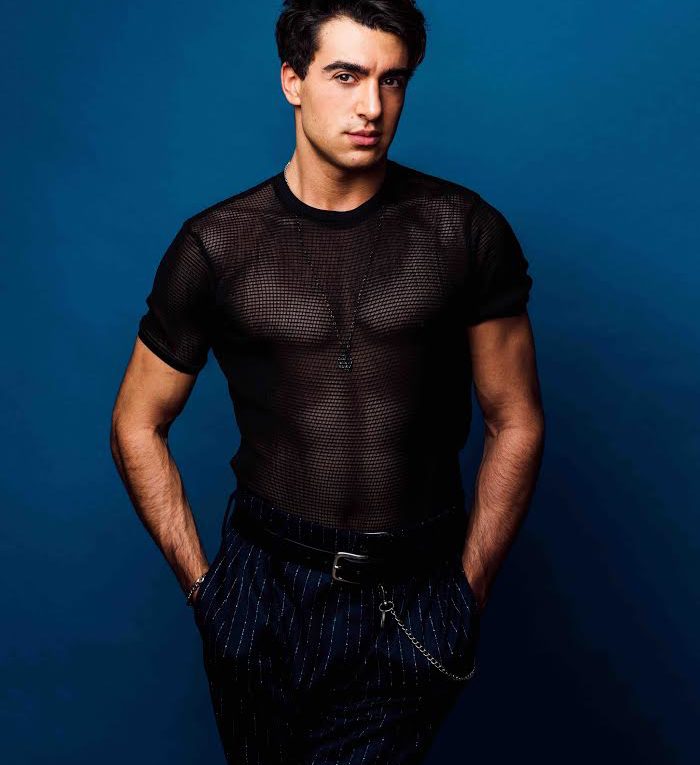 Tell me a bit about how your career began.
When I was a visual manager in Bloomingdale’s, my peers as well as shoppers would ask me, why are you working retail? They insisted I pursue acting or modeling based on my looks and personality. Eventually I quit and attended the Stella Adler Studio of Acting where I completed the year one conservatory. During this same time I was also building my modeling portfolio and learning hands on from top fashion photographers and colleagues in the field what makes a successful definitive model. After Stella Adler, I trained privately with public speaking/acting coach Jill Jaysen. After six months and building a strong foundation through Jill, she referred me to celebrity acting coach Tracey Moore.  I’ve been working with Tracey since August, which has been a miracle of an experience. I’m thrilled and honored to see what her and I can achieve together in this new year, as well as the see the projects we have in the wraps come to fruition.

-Who inspires you as an artist?
Lady Gaga – hands down; because she stands up for what she believes in, she goes above and beyond the norm, constantly pushing the boundaries of society and pop culture alike. Her main fundamentals are equality and love, and not success or being “the best” which is what we need more of in the world. She inspires everyone to be themselves and to be proud of their differences, which is something I aspire to be able to do one day.

-Who are some people you want to collaborate with?
Some of the people I’d like to collaborate with are, Ryan Murphy for certain, because not only is American Horror Story one of my all-time favorite TV shows, but he himself is such a visionary with everything he has created that I would feel so honored to be a part of one of his projects and the strong potential to make it iconic together with his team, as so many of his shows are today. The Duffer Brothers who created the phenomenon Stranger Things is a pair I would die to be able to work with. I have never felt such power and attachment to a show or thought about one so much since binge-watching it. Jennifer Lawrence is my favorite actress, as well as Jessica Lange – just watching them in a scene for five minutes I feel like I learn something new every time or am captivated by their striking essence on the screen. Guillermo del Toro, Peter Jackson and George Lucas have all created some of my childhood favorite movies whom I would be incredibly honored to work with.

-What’s next for you?
I’m looking forward to building a strong foundation with the team I’ve had the pleasure of working with for the last couple of months to make the necessary foregrounds for my home in New York and then be able to travel whilst still working on projects and eventually be bi-costal.

-Tell me a surprising, fun fact about yourself.
I have a really strangely accurate memory of things my friends/family will say, pretty much word for word, that made a lasting impression on me because I thought it was so funny. One time a close friend of mine named Becca had asked me during a conversation if I believed in God. At the time I really wasn’t sure so I just said to her “I don’t know, sometimes.” She wasn’t so keen on my answer so she said, “Well what do you mean ‘sometimes.’ Sunday, Monday, Tuesday you believe in him but Wednesday through Saturday you don’t?” I couldn’t even answer her because it was so hilarious to me

-What are you watching on TV these days?
Currently I’m watching The Haunting of Hill House. My favorite kind of TV shows are fantasy/sci-fi type shows because of the suspense factor, and also because the idea of being able to create anything with the idea of fantasy is something you can make not only incredibly powerful through visuals and ideas but you can make it miraculously captivating through story and character relationship.

-Anything else you want to tell America?
What I’d like to tell America is that as a country and a society we need to be more open and accepting of those who aren’t so “picture perfect” or don’t have degree in this or award in that. There are so many talented individuals in this world who have been through mental trauma, some kind of abuse or anguish that they have a significant story to tell. Through supporting one another we can take each other’s story and make it evolve into a remedy or someway to benefit not only x individual’s type of mutually affected victims but to help change the future so their isn’t so much negativity in the world. Also as a society we need to focus more on the positive because we are consumed with the negative and there is no way that will benefit anybody if all we are focused on is someone else’s downfall. We need to help build each other up as people because, who are we without each other?