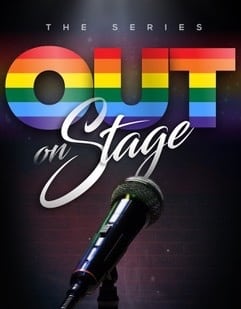 Zach Noe Towers is handsome, talented and probably one of the funniest men in the entertainment business today. One chat with him and you are not only smiling and laughing, but you feel as if you have a best friend for life.

The talented star can now be seen in OUT on Stage: The Series. The show, which airs for six episodes, follows eighteen up and coming comedians who want to share their talent with the world. Zach, who acts as the show’s host, said in a recent interview that he was actually originally supposed to do a comedy special. However, he didn’t feel ready to take on such a project,so he turned it down. He was later offered the role as host, which he happily accepted.

Although he is used to working in the business, Zach admitted that hosting was a strength he had to develop over the years. He says that people watching can notice when a host is bad, so he wanted to make sure he did the best he could. He also added that he is responsible for the energy of the show, which is incredible!

As for the experience, Zach had nothing but good things to say about the experience and hopes to one day bring the show on the road, saying that there is a variety of voices and something for everyone to enjoy.

So what is next for this talented man? Fans will be happy to know that he is also doing a show for E! Called #nofilter, which allows him to watch and comment on people’s first dates. He also has some super-secret projects coming up, which he promises fans will love. His main goal is to be like Lena Dunham and do it all. In fact, he keeps a dry-erase board to keep track of all his ideas and goals and works hard every day to make them come true.

He also shared some advice for those who are trying to make it in the business. It is simple: Make sure you do it for yourself, work hard, keep your eyes on your own work and be grateful for everything. He also reminds them to always be kind.

Keep checking back for more news on Zach and his career.