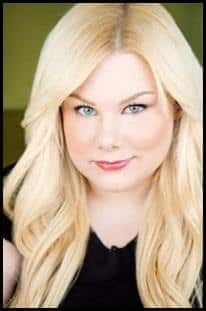 Carly Jibson is a sweet, talented, bubbly blonde that keeps  her fans smiling with every performance. She is best known for starring in Hairspray, but is now gaining new fans with her latest project.

In the hit series The Guest Book, Carly plays Vivian, who went from being the villain we love to hate to someone who ends up starting over after a crossbow accident. We see her running Bikini Bar, where she deals with new guests throughout the season.

In a recent interview, Carly revealed that she thinks Vivian is amazing. She describes her as an ‘unapologetic, brazen’ woman who wants what we all want-to find love. She also thinks she is a strong, sexy woman with raging ambition. She admits Vivian may make some poor decisions, but her intentions are always good. In short, she is the every woman we can all relate to on some level.

In addition to working on the show, Carly is hard at work on a super secret project that will be released in the spring. She cannot reveal anything yet, but she is excited to see the reaction from her fans. She was also seen on the Amazon Prime series One Mississippi. She loved the role and admits that she is disappointed that the show was not renewed for another season,

As for real life, Carly is every bit as ambitious as Vivian. She is also one of the sweetest, most relatable people you will ever meet. During our entire phone conversation, she remained, sweet, positive and kind, acting like an encouraging best friend or sister. She admits that not matter what, she tries to find a balance in life and hopes that others do the same.