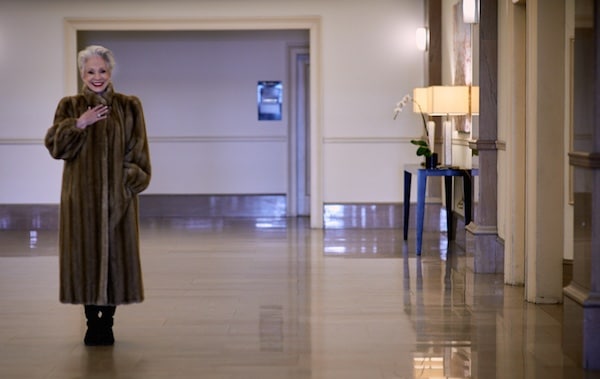 Jennifer Bassey is one of the most recognized faces in the world of soaps. She is best known for playing sexy vixen Marian Colby Chandler on All My Children. She also appeared in shows such as Falcon Crest, General Hospital and Grey’s Anatomy.

Now she is starring in web series Anacostia as Beverly Newman. It is a role that not only reminded of of her immense talent, but also got her an Emmy nomination.

To celebrate her nomination, TVGrapevine talked to the legendary actress in an exclusive interview.  Below are some of the highlights from our chat.

1. Jennifer loves being a part of Ancostia. What started out as a small role eventually evolved into something bigger, leading to her getting an Emmy nomination in the newly announced guest star category. Jennifer was thrilled to get her nomination, especially since it was so unexpected.

2. She describes Beverly as an extremely damaged character. She gave up a child back in the day and now must deal with the ramifications of getting her back after many years. She is also dealing with a dead fiancé and an affair she is having with a key character. She says that there is a lot of drama in her role, but she loves every minute of playing Beverly and hopes there is more to come in the future.

3. One of the main differences between this role and her previous roles is the fact that it airs on digital TV other than regular TV. Jennifer likes this new format saying it allows her to have more input in her role. This allowed the team to write based on what does best and tailor to her assets.

The other big difference is  that the digital show takes longer to film than her previous shows, but overall most things are the same.

4. In addition to being on Ancostia, Jennifer recently appeared on General Hospital as the publicist for the Man Landers book. She said it was a wonderful experience to be on the show, especially since she got to reunite with several of her All My Children co-stars, including Rebecca Budig and Finola Hughes. She also loved working with the rest of the cast, especially Ryan Paevey and Michelle Stafford.

5. Of  course, as I mentioned, Jennifer is most famous for her role as Marian on All My Children.  During her stint on the show, she was best known for sleeping with her daughter’s boyfriend Tad Martin and then eventually marrying Stuart Chandler.

Jennifer admits that she loved playing a bad girl character, but it did come with some ramifications. She says that there were times she got hate mail and attacked for things Marian did because people thought it was real life. However, it was one of her favorite roles because she loves playing the villain.

Another thing she enjoyed about being on the show was the fact that it was so cutting edge. Thanks to Agnes Nixon, they tackled subjects such as AIDS, homosexuality and everything in between. For her it was an honor to be a part of such important parts of television history.