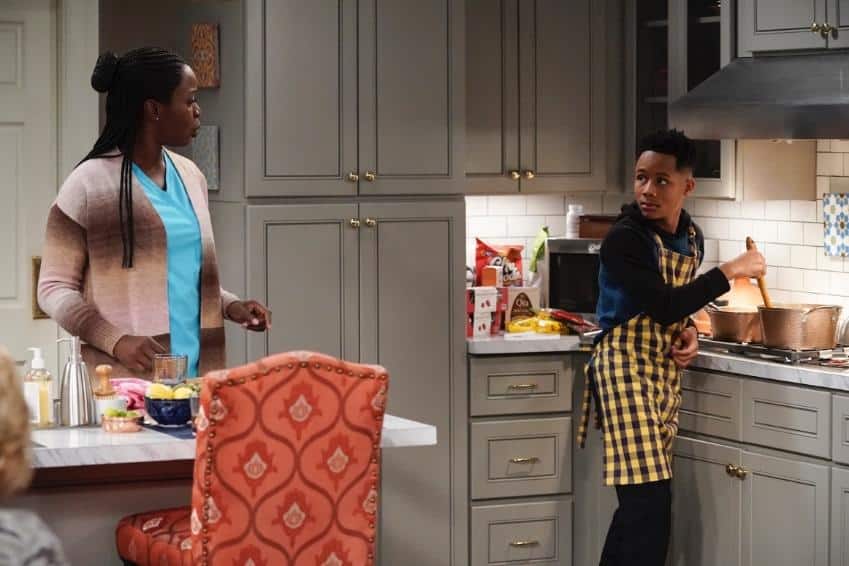 The episode opens with Dele cooking dinner and dancing with Dottie and Bob watching. Dottie comments on how she is enjoying it, so Dele teaches her and Bob his dance.

Abihsola walks in and also begins dancing. She samples his dinner and compliments his cooking. She wants to know how he got the money for the food and Uber and he admits Tayo gave him a credit card. She demands he turns it over and he does reluctantly, while Bob tries to ease the tension by trying to dance.

Later on, Abishola calls Tayo to yell at him about the credit card. He says he is teaching him responsibility, but she disagrees, leading to an argument over who knows best for Dele. He agrees to discuss what is best, but she says no credit card and hangs up on him.

Tunde talks to Ebun about the temperature of the house. She has it to 82, but he thinks that is too hot. She also upgraded his cable package to watch her movies. He wonders how she got his password and she guessed it as Tunde123, calling him predictable.

He then goes to talk to Olu, who is hiding in the kitchen. They argue over who is going to talk to Ebun, but neither one wants to do it.

Abishola talks to Bob about the credit card debacle. He argues that he is using it responsibly and that he would have used it for beer, weed and strip clubs at his age. He wants her to lighten up, but she disagrees and refuses to talk to him because it is none of his business. He argues that he should be involved because he is his stepson.

Later on, everyone eats dinner. Christina wants to know what Dele has been up to, but is left confuses when he says he isn’t allowed to have money and not allowed to have fun, thanks to Abishola.

Dottie tells Bob and Abishola they began eating because they couldn’t wait for them. Douglas says they were told to eat, but Dottie gets snarky. There is some tension over the credit card situation, making everything uncomfortable for all.

The next day, Abishola avoids calls from Bob and her mom. Kemi and Gloria want to know what is wrong, so she explains the situation. They both try to help her see the error of ehr ways, but no avail.

Later on, Bob talks to Dele about getting an XBox. Dele argues that Abishola will hate the idea, but Bob says they are going to get one anyway.

Tunde and Olu visit Abishola at work to talk to her about Ebun. They want to get her out of the house, which means Abishola and Ebun will need to make up. They try to guilt her into it, even though she doesn’t want to deal.

That night, Bob, Douglas, Kofo, Goodwin and Dele play video games. Douglas says video games keep him being the young Funcle Doug,’ while Kofo and Goodwin wonder how Abishola is going to react.

Bob, for his part, takes over the game and promises Dele that this will be something special for the two of them.

Abishola brings Ebun chocolates as an apology, saying that she should not have been disrespectful. She finally gets her talking by talking to her about the credit card debacle. This leads to them bonding and Ebun moving back in. Tunde and Olu happily bring out her packed bags.

When Abishola and Ebun get home, they are upset to see Dele playing video games. Dele gets sent to his room, while Douglas, Kofo and Goodwin leave.

Bob and Abishola argue about the video games, but she finally sees that they need to work together for Dele’s sake. They declare the silent treatment over, while Ebun takes credit for saving their marriage.

The episode ends with Ebun giving Dele advice on cooking and life, while Tunde smirks at the idea of Ebun being Bob’s problem now. She thend gives a toast to Bob for helping Abishola see the error of her ways.