This episode opens with Douglas and Goodwin talking new promotion. Douglas compliments his work ethic, while Goodwin shows signs of a heart attack.

As Douglas checks to see if he is okay, Bob and Kofo walk in, with Bob introducing Kofo as the new marketing director. Kofo tells Goodwin he borrowed his suit for the occasion. Goodwin says it is his favorite and he wants to be buried in it….and passes out.

At the hospital, Abishola tells Goodwin he had a panic attack and is going to be fine. Goodwin thinks it is more serious, but she says it is psychological. He doesn’t think his family will understand, but she lies and says it will be okay.

In the waiting room, Kofo tells Goodwin’s wife Tiwa that he is willing that to step in as a husband, but she tells him that she would rather step off a bridge. Bob comes in, only to get yelled at by Tiwa in Nigerian. Kofo says she is saying good things, but he knows the truth.

Goodwin then comes in with Abishola and tells Tiwa he was attacked by his brain in Nigerian. Bob wants to know what is going on, but Abishola says she will tell him later.

Christina goes to visit Dottie, who guilts her about leaving the business. However, she gives her money to tide her over….or for a handgun. Christina resists at first, but then takes the money.

Bob and Abishola have dinner with Olu and Tunde. They discuss the situation with Goodwin and Kofo, which was posted on Kemi’s Facebook page.

Olu comments on Bob’s weight loss and he says that he is eating smaller portions. She tells Abishola that a fat husband is a happy husband that no one else wants.

Tunde asks Abishola about her day. She talks about the sensitivity training she had to attend, which makes Tunde think the world has gone mad.

Christina talks to Kemi, Abishola and Gloria about her job problems and how she feels lost. Kemi offers to take her to a cleansing place, making her feel better.

Goodwin returns to work and everyone seems happy to see him. He wants things to go back to normal, but Bob wants him on light duty. This leads to an argument and Goodwin getting sent home.

Douglas asks to go home too, but Bob tells him to get back to work.

Christina, Kemi and Abishola go to a religious service to find answers. Kemi keeps getting nos to her questions, while Christina discovers that a dark force is holding her back…..her mom.

Kofo comes home to find Goodwin there, drinking beer and hiding from his wife. They end up doing a puzzle together and having a bonding moment.

Christina and Abishola do a spiritual cleanse, which confuses Dottie, but ends up allowing her to make up with Christina.

Goodwin takes charge on the floor, with Kofo and Bob watching. Bob goes to talk to him and says he is the only one other than him that can do every job in the company. He says that he will one day take over the company when he retires. Goodwin is honored, but wants it in writing.

The episode ends with Kofo delegating tasks to the women on the floor. One goes to lunch, while the other one makes it clear she is not amused. 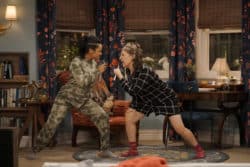