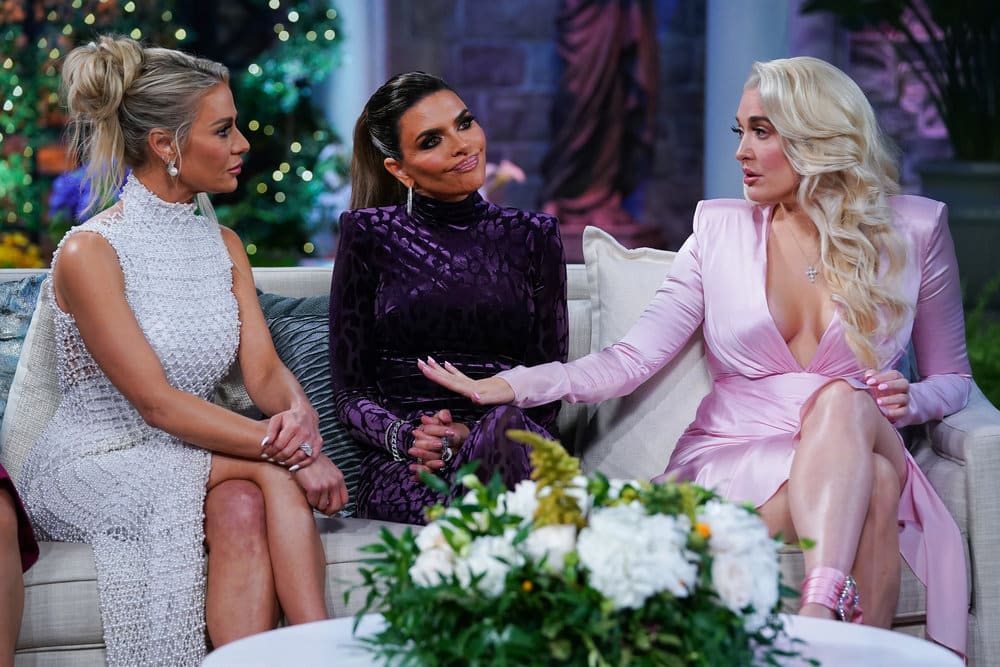 Tonight is part two of The Real Housewives of Beverly Hills Reunion on Bravo. The episode opens with Erika confessing that Tom had been unfaithful for years, but she remained faithful until she filed for divorce.

We then get a recap of her highlights from the season, which includes her divorce announcement, past clips with Tom and the aftermath.

Andy asks if she would have been legally allowed to have half of what Tom had if she divorced him. Erika says she is entitled to half the debt because of the lawsuits.

Erika keeps claiming she is telling the truth and keeps bringing up things Tom had done. She also claims that she knew of three mistresses Tom allegedly had, including one she discovered on the day she left.

Andy asks why her divorce wasn’t finalized yet and she claims that it is because of the competency hearing. He goes on to ask her more questions from fans, including ones about gifts Tom may have gotten for mistresses and how she got her car and house. She is unable to answer much because she claims she is unable to due to legal reasons.

Kyle then talks about a friend whose mom has Alzheimer’s and claims she saw similarities in Tom’s behavior. The other ladies thinks it makes sense that the dementia claims could be real.

Erika continues to ramble, claiming she didn’t leave him due to the dementia, how she took him to the hospital and refused to allow him have surgery, claiming that she would never be as cruel as the fans are alleging.

She claims she is trying to figure out what is going on and who she was married to for twenty years. At this point, she just wants the truth and hopes he has not done everything he has been accused of doing.

Erika continues to talk in circles, saying it is common to find out things during a divorce, but she needs to take care of herself and find out what Tom has really done.

After a look at Dorit’s highlights, we get into whether or not she or Kyle talk too much….and Andy even brings up Kyle’s fight with Carlton in season four! It goes on for quite awhile, causing Andy to yawn and Dorit accusing him of being bored.

Dorit then goes into talking about diversity and how she may have used words poorly, unintentionally insulting Garcelle.

Kathy talks about how she learned a lot from Garcelle, who thinks there were a lot of tough conversations had this season. However, she thinks it was a wonderful thing.

After some plastic surgery updates from Kyle, we get into Lisa’s reaction to Amelia’s relationship with Scott Disick. She still hopes Amelia will end up with Harry Styles.

Kathy and Kyle then talk about the ups and downs in their relationship and hug it out. The both of them begin crying and how they regret being estranged for so long, as well as their family dynamic. Kathy begins to cry again and hugs Kyle. Everyone else begins to cry as they watch the sisters comfort one another.