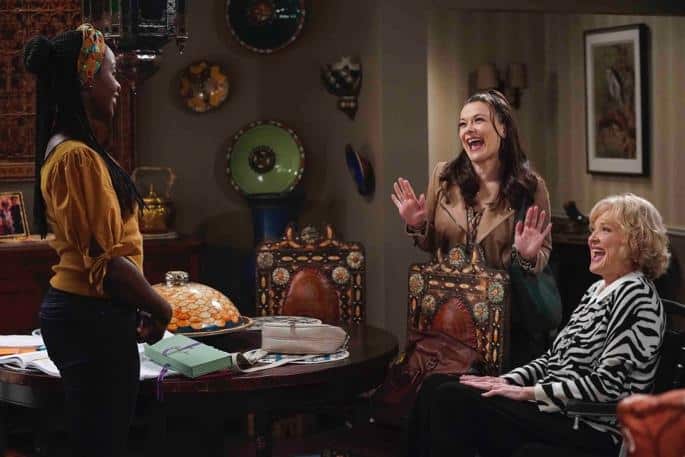 This week’s Bob Hearts Abishola opens with Abishola FaceTiming with Dele. They are filling each other in on their lives and bantering, until Dele calls her by her full name. She says they are done joking at that point.

Later on, as Abishola is studying, Dottie and Christina come in to give her a gift. It is a pair of gloves custom made for her, just like all the women in the family have received.

After some awkward conversation, the ladies decide to go out for a girl’s day, which includes mani-pedis and day drinking.

At first, Abishola resists the drinking, but Dottie convinces her that it is ‘exercise.’ Christina also tries to talk to the manicurist in Vietnamese, but just ends up insulting her.

At MaxDot, Kofo tries dropping things on his feet to test out his new steel boots. Goodwin is confused by this.

Douglas comes over and talks to Kofo about his boots, which were purchased at an outlet store. The two of them get into the pros and cons about said stores, making Kofo wondering why MaxDot doesn’t have an outlet store. Bob overhears and tells Kofo this is a good idea and tells him to write up a proposal.

Douglas teases Goodwin that they will all day be working for Kofo. Goodwin says that will happen over his dead body.

At work, Abishola has trouble working with her new nails. Gloria teases her about working with such long nails, but agrees they are pretty.

Abishola then boasts about how she deserves ‘me time’ more than anyone on the floor. Gloria points out that she also works on the floor and then tells Abishola to go do a catheter with those nails.

Kofo and Goodwin are at home, fighting over the fact that Kofo wants to take over at work. He suggests that they find a way to work together, but Goodwin will only do it if Kofo gives up his proposal. Kofo says that is a no go, which leads to more tension.

The next day, Abishola is studying when Christina comes in, wanting to go to brunch. Abishola says she needs to get some studying done, but Christina insists that by eating brunch, she will be saving time.

Abishola agrees that she does need to eat, so decides to go. Christina also wants to go shopping, but Abishola says she only has time for brunch.

However, the girls end up spending the entire day drinking, shopping and napping….until Abishola wakes up screaming that she agreed to just brunch.

The next day, Abishola has a hangover and tells Bob she feels awful. He gives her a concoction that he says tastes and smells bad, but will cure said hangover.

She tells him she feels bad and isn’t sure what to tell Dele about goofing off and not studying. He reminds her that she has been through and done a lot lately and deserves a chance to let loose once in awhile. She agrees and goes to drink the concoction, only to have it make her sick.

Douglas drives Goodwin to work because he has a flat tire. Goodwin wants to stop for donuts and says he has a plan to tempt Bob with donuts so he will agree to the proposal.

The two of them end up talking about Kofo, who, it turns out purposely sabotaged Goodwin and convinced Douglas to help.

Kofo does the proposal for Bob, with the donuts and without his cousin.

On the bus, Abishola and Kemi talk and bond. Abishola feels like she is losing her roots, but Kemi convinces her things are okay.

Later on that day, Abishola visits Tunde, Olu and Morenike, who is making them dinner. The three of them are convinced Abishola a fancy lady now, making her feel even worse that she did before talking to Kemi.

The episode ends with Abishola and Dele talking via FaceTime. He mentions brunch, but she tells him it is not a good idea. However, she ends up going with Christina.