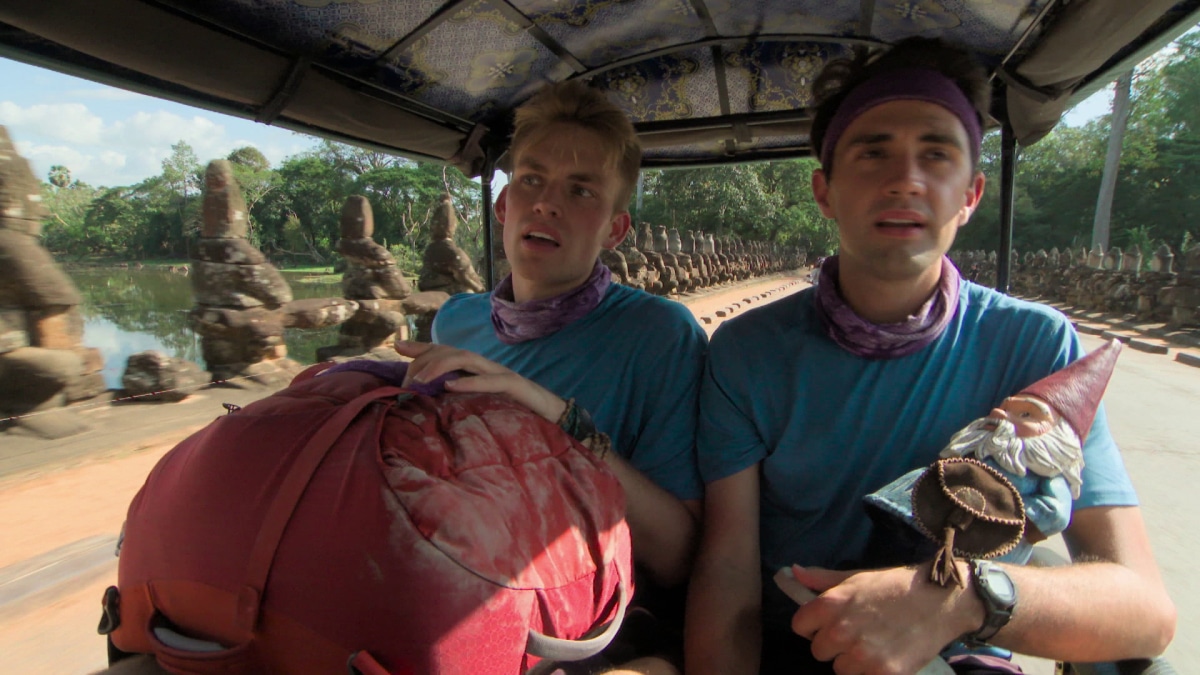 ÒGetting Down to the Nitty GrittyÓ Ð The final five teams race through Siem Reap, Cambodia where they face the second and final double U-turn of the season, on THE AMAZING RACE, Wednesday, Dec. 2 (8:00-9:00 PM, ET/PT) on the CBS Television Network. Phil Keoghan is the host. Pictured L-R: Will Jardell and James Wallington Photo: Screen Grab/CBS ©2020 CBS Broadcasting, Inc. All Rights Reserved

Tonight our final five teams will compete on CBS’s The Amazing Race. They will be heading to Siem Reap, Cambodia. As of right now all of the teams, minus Eswar and Aparna, have won at least one previous leg.

There will be a U-Turn in this episode, which Eswar and Aparna plan to use, as they say at this point it is every team for themselves. However, Riley and Maddison, Will and James and Hung and Chee are still in their alliance and plan to target Gary and DeAngelo.

Once the teams arrive, they must find a Travelocity gnome to get their first clue. This leads to them fixing a tuk tuk for a driver and then getting their next clue, which has them board a boat and head to Chong Kneas Village.

James and Will and Hung and Chee are in the lead, while Eswar and Aparna end up in last place. Riley and Maddision temporarily fall behind, but end up catching up. DeAngelo and Gary are also behind.

Hung and Chee steal first place from James and Will and deliver a basket in order to collect their next clue.

DeAngelo and Gary use the U-Turn against Eswar and Aparna. In order to prevent anyone else from getting U-Turned, Riley and Maddison use the other one on DeAngelo and Gary. Then it is time to head to Khmer Floor Handicraft for their next clue.

Roadblock! The teams have to make fragile tiles and then complete a puzzle. DeAngelo puts him and Gary behind by not paying attention, while James and Will get ahead by doing what they are supposed to in order to complete the task. However, despite initially messing up, Riley and Maddison finish first and head to the Pit Stop at Angkor Thom.

Riley and Maddison end up arriving first and winning a trip to Norway.

James and Will come in second place.

DeAngelo and Gary come in fourth place. (despite hitting bad luck with traffic and struggling with the roadblock)

Eswar and Aparna come in last and are eliminated.