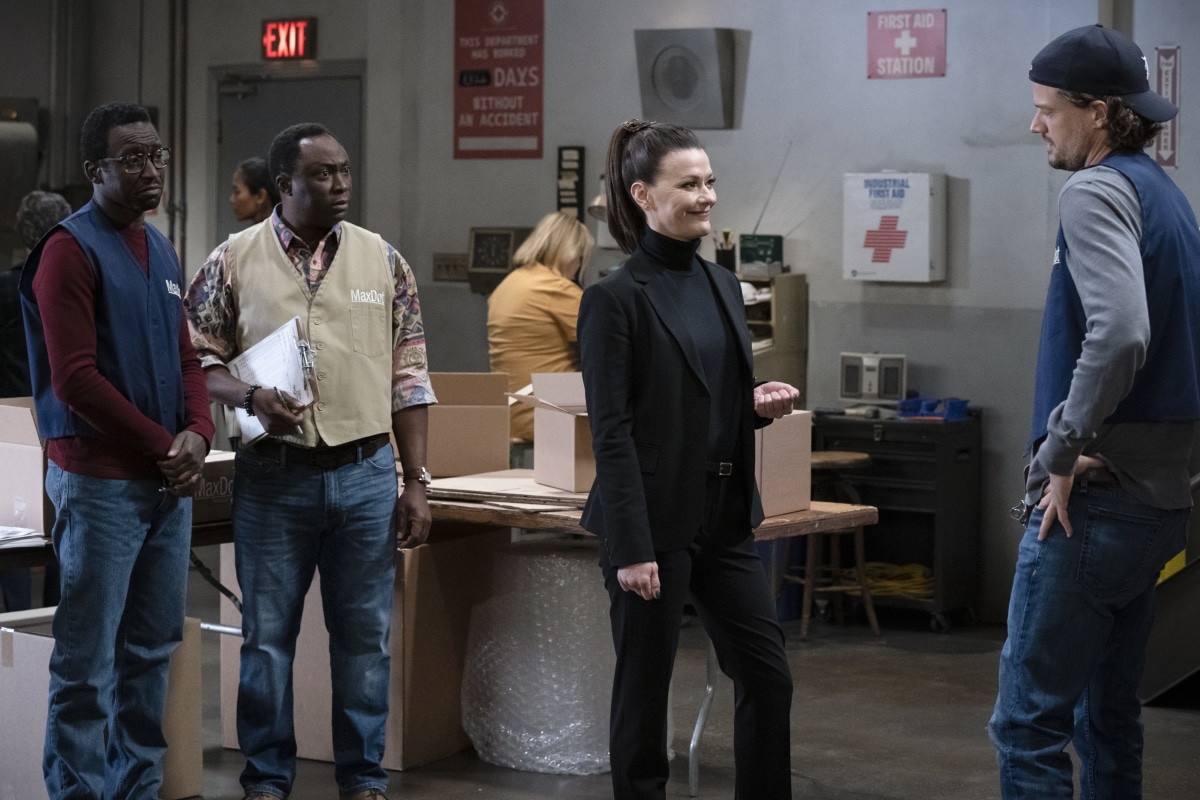 ÒCamp BananasÓ Ð For the sake of BobÕs health, Bob and Abishola try reducing stress by taking a day off together. Also, Christina is boss for the day at MaxDot, and Gloria steps in to care for Dottie, on BOB HEARTS ABISHOLA, Monday, Dec. 7 (8:30-9:00 PM, ET/PT) on the CBS Television Network. Pictured (L-R): Anthony Okungbowa as Kofo, Bayo Akinfemi as Goodwin, Maribeth Monroe as Christina, and Matt Jones as Douglas. Photo credit: Michael Yarish/2020 Warner Bros. Entertainment Inc. All Rights Reserved.

The episode opens with Bob (Billy Gardell) getting ready to take a stress test. He is being sassy to his doctor (Regi Davis) by saying he is doing a test that may kill him in order to save him. The doctor tells him it is standard protocol and has him begin the treadmill test. Bob continues to joke around about how things were done back in the day, including about getting a spoonful of heroin and how the last time he ran was in 2004 to catch a flight. He says that if the doctor wants to hear more, he will have to slow down.

At lunch, he tells Gloria (Vernee Watson), Abishola (Folake Olowofoyeku)and Kemi (Gina Yashere) that he thinks that doctors stress people out on purpose to put them on expensive meds. Gloria tells him not to be ridiculous, but quietly agrees.

Abishola wants to know why he kept his bloodwork a secret and he says it is illegal for her to look at it on her phone. She says it is only if she shares it and shows it to Kemi and Gloria. Bob and Abishola continue to argue about his health (with Kemi and Gloria chiming in) until he admits he is wrong about being as healthy as he thinks he is.

That night, Bob and Abishola talk to Dottie (Christine Ebersole), Christina (Maribeth Monroe) and Douglas (Matt Jones) about Bob’s health. Bob admits he needs help from them, with Christina becoming hysterical, Dottie complaining and Douglas drinking. Abishola says there needs to be less junk food and alcohol in the house. Doug says he is eating and drinking as fast as he can. She also says there needs to be less chaos. Christina complains that she didn’t have this kind of support when she was trying to get skinny. Dottie reassures her that she did get support.

Christina offers to step up to help Bob. Douglas snarks about her doing actual work, so she gets back at him by making fun of his demotion. Dottie chimes in, saying not to make fun of him since they don’t when she is at ‘crazy camp.’ This upsets Christina, so Dottie defends herself by saying she isn’t allowed to call it Camp Bananas.

Christina and Douglas continue to fight, with Dottie yelling at them. Bob and Abishola said it went well, and she is shocked they aren’t dead already.

Bob takes Abishola home and quips that he would go to Alaska to get away from his family. He suggests they play hooky the next day, but she is unsure. They walk into her door and see Olu (Shola Adewusi) and Tunde (Barry Shabaka Henley) trying to shake the remote out of the couch. She says pick her up at 8. Tunde then changes the channel and says they are closer to finding the remote. He says he will pick her up at 7.

At work the next day, Christina is on the floor talking to coworkers and gets to Kofo (Anthony Okungbowa)and Goodwin (Bayo Akinfemi). She tries to flatter them, but only succeeds in making them feel uncomfortable. Douglas witnesses this as he is walking by and asks what is going on. She says that as their boss/superior, she is trying to make them feel more comfortable. This leads to the two of them fighting and Kofo laughing when Douglas calls her fart face. Kofo apologizes when he sees her getting mad. Christina tells Kofo and Goodwin her door is always open to them and tells Douglas to get back to work.

At the house, Gloria is taking care of Dottie, who says she can’t do much because she is upset that her friend Agnes died. Gloria gives her condolences, but says she knows she is trying to get out of her exercises. She uses reverse psychology on Dottie, who knows what’s up and they begin to bond.

Bob gives Abishola a blindfold to wear in the car so he can surprise her with his plans for the day. She says no and asks if he also wants her to get into the trunk. He has a lot of plans for the day, including a couples massage, but she shoots everything down. She wants to do her errands instead. She especially wants to go to the laundromat with industrial washers. He tells her jokingly to get in the trunk.

Dottie and Gloria have lunch and beer and junk food to celebrate a hard days work. They bond some more and realize they were in the same area until Dottie moved. They get into a conversation about racial issues that occurred when they were younger.

Douglas goes to see Christina, who demands he get her lunch. They get into another argument over hierarchy and she says he has to clean his old office, which is the new employee lounge now. They continue to fight and embarrass each other over the intercom.

Bob and Abishola have a picnic in the park, which he is not enjoying, until they cuddle and make fun of kids playing Frisbee. They admit they worry about each other.

Dottie and Gloria continue to bond over where they grew up and the transformation of the area.

Kofo and Goodwin clean Douglas’s old office and are upset when they see his old pay stub, realizing he gets more money than them. Christina comes in and makes an offensive comment, saying she is listening and learning when she is called out. They ask her about the pay stub and she grabs it and runs away, telling them not to look at the others.

Bob and Abishola go to the laundromat, where they watch telenovelas and relax while doing work.

The episode ends with Christina calling everyone together to tell them there is a free coffee truck for everyone. Kofo and Goodwin want to get more money, but they say they truck is what they get. Everyone goes to get coffee, including Douglas and Christina, who go to the better place across the street.