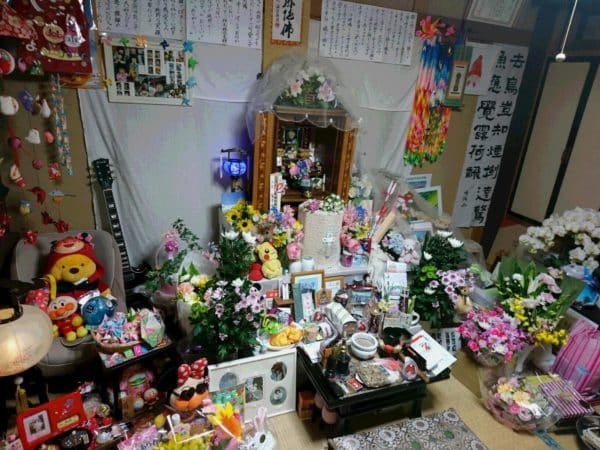 The fourth episode opens with information on the March 11, 2011 tsunami in Japan. A monk claims he talked to someone who was beneath the ocean…who is a spirit of a man who died in the tragic event.

After the intro, several people talk about the history of the area where the tsunami took place and why the ocean meant a lot to so many people. We then get news footage from the tragedy and historical information on past earthquakes. A man talks about how he knew it was coming and how he warned people to leave the area. This leads to some more footage of the event and talk about what exactly happened. Over 15,000 people died with over 2,000 still missing.

There is a lot of footage of the aftermath and people looking back on those they lost. One of the survivors talks about finding his eldest daughter, who had died. He also recalls how he lost his youngest daughter. Due to lack of power, there were no funerals, so they show the burial process, which took place before the cremations.

In June 2011, there were rumors of ghosts. There were dozens more the following October. One of the people was a man who lost his mother. He saw her in the shelter and when he went to see her and take a picture, her face changed into someone he never saw before.

Another woman lost her three year old son and suffered from depression and panic attacks. One night, she claims that one of his toys went off, as if someone were playing with it. IT made her realize her son was with her in spirit and gave her purpose again.

The topic changes to how the Japanese view death and how it is different from Americans. The moving on process is a bit different and it is said that the living and dead feel it is unfair for someone to leave without saying goodbye.

Another woman remembers a spirit she saw, and then we see how the city changed since the tsunami. She talks about spirits and how she has seen them since she was a child. According to her, a lot of the ones who died in the tragedy have no idea they are dead, including two men she encountered while she was driving. She says she had to tell them the truth because she didn’t want them to suffer anymore.

Several more people, including taxi drivers claim they have seen spirits. A sociology professor studying the topic says the drivers lost many people and welcome the ghosts with open arms, therefore, those encounters are most believable. He adds that the ghosts are a way to help people cope and in the past seeing spirits was may not have been reported publicly.

There is talk about how spirits follow rituals and how death is not the end of the journey, hence why these experiences happen. The relationship between the living and dead is fundamental.

We see more flashbacks to people talking about spirits and how it was an experience that they could not understand. There is focus on one woman in particular named Ami, who seems to see and feel things when she is possessed, but she didn’t lose anyone in the tragedy. For some reason, she just kept seeing and feeling the ghosts. These incidents would often occur between 7 pm and 3 am. She claims the spirits who needed to let go would enter her body. She recalls one specific incident with a brother and sister who were holding hands when the girl let go and how she felt helpless. She wanted to say sorry to her mom for letting go, so the woman whose body she was in acted as her mother to help her let go.

The monk seems to want to help Ami, despite the fact that it goes against his beliefs. He thinks there is something he can do, so he sets up an event of people who are hurting so they can talk things out. It leads to a very moving memorial so people can say goodbye to their loved ones.

The episode ends with family photos being found in the debris and a dedication to those lost in the tsunami.