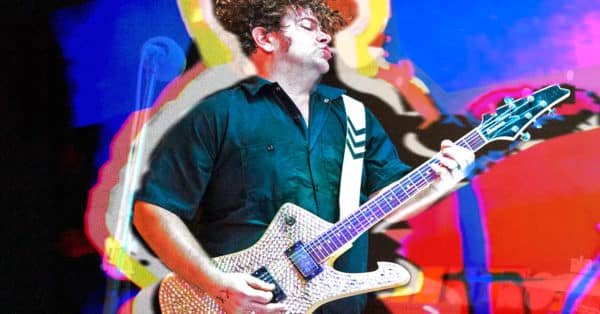 0
Read Time:5 Minute, 37 Second
Tell me about “Leaving While You Stay”, what’s the inspiration?
The meaning has morphed a bit in recent times but the meat & potatoes remains — being out of your mind just sitting in your chair. It’s the narrative in your head versus the reality of your situation. But mostly, it’s about getting old farts out of control of the world. There’s nothing more delicious than a generational revolution.

-Tell me a bit about how your career began.
Thanks for asking! Let me set the wayback machine. My dad would record me singing into a Radio Shack tape deck at age 4. That got me used to hearing my own voice. Headphones were on my ears by the time spoon feeding started. My siblings played LP records by Led Zeppelin, Supertramp, Yes, Kraftwerk, the ‘Saturday Night Fever’ soundtrack… At 6, I asked my sister to get me the 45 rpm 7 inch single of a song I loved on the radio (Gary Numan ‘Cars’). Money earned mowing lawns in 4th grade went towards two cassette tapes – Foreigner ‘Records’ and Phil Collins ‘Face Value’. That summer, an older neighbor had a Cort Electric Guitar shaped like a star. I borrowed it, along with his Gorilla guitar amplifier (remember those, GenX musicians?) which had a knob on it called TUBE CRUNCH. Now, turning this knob all the way to the right sounded pretty awesome. I played along with Van Halen’s ‘1984’ LP and never looked back. The thread in this story? Open yourself to be influenced by family, neighbors, and community. Relate to each other through art, and shared experience. We need more of this ASAP.

-What are some of your proudest accomplishments so far?
So, so many. All of them involve meeting new friends brought together through music. Touring England as a ‘side musician’. Performing a fuckton of shows in many bands both as me and a side mouse while being based out of NYC in the 00’s. Being in Glenn Branca’s live ‘Symphony for 100 Guitars’ performance at the base of the World Trade Center in July 2001. Think about that for a moment. Here’s a big highlight: I was hired by a big company in 2010 and negotiated a large ‘moving bonus’ to move east to California. With a flash of punk rock / DIY roots, I used only $1k for the move, taking the rest to book my band a week recording in Chicago with Steve Albini who’d worked with Nirvana, Pixies, PJ Harvey and so many other records I love. So my advice is take your resources and use them to better yourself and your craft. The things I learned working with him carry me to this day.

-Who influences you as a writer/artist?
If you do things on your own terms without artistic compromise, you’ll get my vote. Trent Reznor wins, hands down — how he conducts his work on his own terms, his ability to (ironically) collaborate well. Chuck D, who I got the pleasure of meeting at a SXSW session, is 100% no bullshit. Etta James always puts me right. Jim James has yet to put out a bad record. Dolly Parton’s work ethic and survivalism – she’s a genius songwriter. Jim O’Rourke’s Drag City LPs. I’m a fan of Rick Rubin’s aesthetic and approach. We saw David Byrne on Broadway during a break in our tour last fall and I cried a lot. Vanessa Silberman’s awesome. Carissa Johnson. But I mean, I love pop. We still need more melody in the world. Joan Jett. The Go-Go’s. Dave Grohl! Josh Homme’s stuff. Spoon makes fantastic albums. Chuck Prophet. I still like albums. I still like sitting down listening to the side of record with guests that come to the mountain house. The side of an LP – coupled with half a bottle of wine – is about the right amount of time to figure out if someone will be in your forever tribe.

-Who are some people/companies you might want to collaborate with?
My career has been interwoven between music and technology. The universe has been exceptionally kind to me. I’ve worked in a bunch of capacities – some musically, and most with helping hire teams and organize people. Building a great team for a tech company isn’t any different than putting a band together, or writing, recording, and mixing a song. How will these elements work in harmony to achieve something greater than the individual elements? Politics is fascinating to me. What the world needs is a solid team. Stop worshiping one word people (unless that word is ‘Prince’). Why else do people love all these craptastic movies with teams of super heroes saving the world? Having said all that, I’d spend a month in the studio 1:1 with Rick Rubin or Prince (since this is fantasy talk). Or maybe a weekend getaway with a piano and Paul McCartney. I’d like to hang out with my new favorite band De Staat.

-What’s next for you? anything new and exciting in the works?
My main man Jacob Winik has been engineering my albums for a decade. We snuck in to Tiny Telephone Recording for a week (here in northern California) during quarantine, along with Jason Slota aka drummer extraordinaire and our newest musical collaborator Ian Miller on bass to record 11 songs. Half of the songs were written a few days before the session. I wrote not thinking about performing songs at a gig because, well, our whole west coast tour got cancelled along with the rest of the world’s travel. Everything went down live for the most part straight to 2 inch tape. Then Jacob and I mixed everything in a day. I’m a huge fan of ‘record fast, mix slow’, however this time out we got shit done as if it were the last recording we’d ever make. All of this will come out as the year progresses. It’s a lot slower, more heavy lyrically. Kinda like life these days, maybe?

-Tell me a surprising, fun fact about yourself.
I secretly think I’m starting to maybe slowly like The Grateful Dead.

-What are you watching on TV these days?
It’s all about ‘Killing Eve’ right now, along with this Netflix documentary on drugs. If you do drugs, and I know you do!, you should watch this series.

-Where can people learn more about you?
I’m on the Instagram tip, mostly. Spotify and YouTube have a whole lot of stuff for your senses, too.

-Anything else you want to tell America?
Don’t give up! Support local people. Stop using amazon so much. Also, spend some of your unemployment and PPP loans on buying shit directly from artists. Wouldn’t that wall look better with a painting on it?