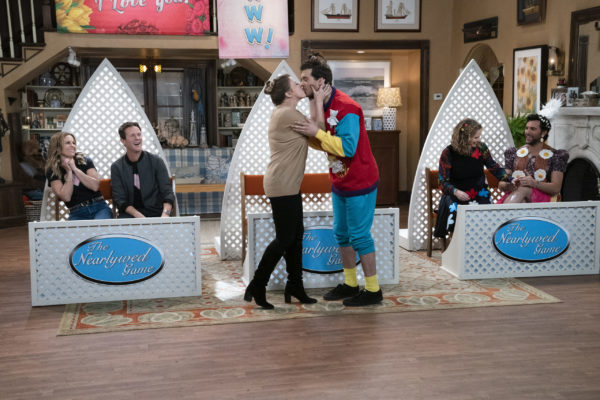 The episode opens with DJ saying she got an invitation to meet in the kitchen. Kimmy also has one and they wonder what is going on. Kimmy wonders how the sender knows them and how they knew they have a kitchen.

Stephanie walks in and Kimmy says the kitchen is invite only. Steph says she got one too. Max, Ramona, Tommy and Jackson walk in, saying they have a wedding shower extravaganza planned for the couples. They will be doing the Nearlywed Game, which is a spoof of the Newlywed Gam, which Jackson never heard of.

DJ remembers when she did a similar show with Steve….a couple of years ago with Jesse and Becky. Steph says they didn’t do well then. DJ says this time will be different because she and Steve know each other so well. Steph says she and Jimmy could do well because she awlways knows what he is thinking, which is very little. Kimmy vouches for that as Jimmy’s loving sister.

The winner will get to pick the first dance song. Steph wants Purple Rain, DJ Wants Everything I Do, I Do It For You and Kimmy wants Rump Shaker…..to which she does a dance.

The kids are going to live stream it, which turns into the battle of the generations…which Kimmy wants to tweet about..#KidsTheseDays #YOLO

DJ tells Steve about the game and says how it is almost unfair they know about each other. Steve asks if they should quit and she reminds him that she said ALMOST. She gives him a Team SteeJay shirt that she did NOT have laying around in a duffle bag for a competition, because that would be crazy. However, she does have various versions.

Kimmy tells Fernando she has always dreamed of her third wedding, complete with a white dress and shaking her rump He says he wants her rump to be shaking.

They discuss how between marriage, divorce, litigation and court mandated therapy, they might have a chance to win.

Steph and Jimmy also discuss their odds of winning. Steph finally wants to beat DJ at something. Jimmy tries to think of something she has beaten her at….with no luck.

This brings out Steph’s competitive ‘DJ’ side, which begins to scare Jimmy.

Ramona comes downstairs to see the game show’s elaborate setup. She wonders how they paid for it since they said her ice cream cake was too expensive. The guys say corporate sponsors are paying for it, causing Jackson to quip about shows being interrupted by commercials.

The show begins with Ramona as an announcer, Max hosting and Jackson working the camera iPad.

The couples are introduced and the game begins. The guys go into the sound proof laundry room with the washer on light spin and the girls get the first question.

Question 1: Who was your first celebrity crush?

Steve guesses correctly, while Jimmy thinks it was Charles in Charge (as well as Growing Pains, toast and the St. Louis Arch) and Fernando guesses himself. When he sees Kimy’s answer, he freaks out.

Question 2: When did you realize you were in love?

Jimmy: Anxiety!! (Incorrect….the answer was box of kittens)….and then he freaks out.

Fernando: He threatens Joey McIntyre (incorrect: happy hour at Applebees)…which leads to him threatening Applebees and Max cutting to commercial.

After the kids act out the commercial, Jimmy apologizes to Steph for messing up. She tells him to stop overthinking. She calms him down and they prep for round two.

Steve thinks the others aren’t having as much fun, but DJ calls it winning….like Tom Brady and Meryl Streep do.

Kimmy and Fernando scheme to win by answering only with D. At first, she thinks it is cheating, but he compares it to smashing tires when he was competing.Then she agrees because she wants to stop being the ‘friendly billy goat.’ They are determined to win.

Fernando asks Steve to tank the competition so his ‘William Goat’ can be an ‘airplane.’ He says DJ loves to win and (in theory)doesn’t want to see her lose. However, Fernando wears him don with his begging.

The game begins again….with Jimmy freaking out over Jackson not saying one,Max yelling at Ramona for going off script and another commercial for Lattice World.

Score update from Ramona: Steve and DJ are crushing it, Jimmy is incoherent and her parents are dead last.

First question in this round: What is the first movie they saw together?

Steph and Jimmy: Blake Shelton and Gwen Stefani aka country guy and blonde girl with red lipstick. (Cosmo the judge accepts this as an answer….or has to go for a walk)

Kimmy and Fernando: She says Desi and Lucy, he says David Beckham and Dosh Spice.

DJ and Steve: She says Kate Middleton and Prince William, he says peanut butter and jelly. DJ says they are sandwich fixings and he says they go great together. She notices him and Fernando exchanging looks and becomes suspicious.

Kimmy and Fernando: she thinks Fernando will say the way she chews, but he says double jointed knees.

Dj and Steve: She thinks it is her competitiveness, he says too many alarm clocks and she argues she doesn’t even use an alarm clock. He says she is beautiful and she accuses him of trying to lose on purpose.

Steph and Jimmy: She thinks it is her snoring, he says nothing because he likes her how she is and she begins to name all her bad habits. He randomly says ‘what is grass’ and she storms off, followed by the other women, who are also frustrated.

The kids go into another commercial.

The guys feel bad, while the girls rant….DJ even uses the F BOMB FLIPPING!

Kimmy says they should have married Joey McIntyre.

Max says the show is a big hit! DJ, who disagrees, wants to go to bed and set her nonexistent alarm clock.

Jackson and Ramona tell them to come back because not only are the guys crying and want to make it up to them, but this is a hit! Plus, Max is doing a Price is Right house party in an hour.

Last question: What goofy habit do the men find adorable about their fiancées?

Fernando: He comes out dressed as Kimmy, saying he loves her style. They make up and he removes bacon from an unfortunate place.

Steve: He loves her type A, competitive, compassionate personality….and apologizes with three banners. They make up.

Jimmy: He does her Love Shack dance from the telethon….dressed like her in the eighties. They make up and they agree to play Love Shack at the wedding.

The episode ends with a dance party.