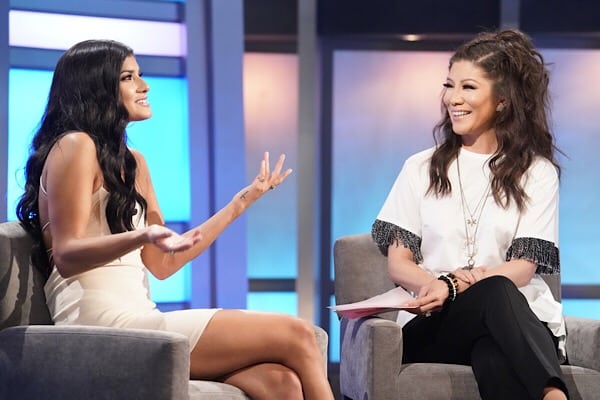 Last night was another eviction night on CBS’s Big Brother. Christie and Analyse were on the block, with the house going after Christie. However, as Julie Chen Moonves says, expect the unexpected.

Christie decides to convince everyone Michie and Nick have a deal…complete with tears, of course. She tells Michie that they need to target Nick, who is basically skating by in the game. She also tells Jessica, Nicole and Tommy this plan, not knowing that Nick is listening in at the door.

Nick then runs to Michie to tell him how annoying Christie is with her behavior. He decides to confront her at dinner.

Wait…Nick and Christie are pretending to fight now? What? They expose each other for their game play and Christie asks everyone who thinks Nick would put them on the block….and it is no one. She then declares Nick her target if she stays.

Holly and Michie decide it will be better to get Analyse out so they can target Nick next week. If she stays, she will just float, whereas Christie will strike more deals, knowing she is a target.

Eviction time! Both girls plead their cases as to why they should stay. Then in a 5-1 vote, Analyse is evicted and sent to the jury. Holy house flip, Batman!

After we see Analyse say goodbye, we get to the HOH competition, which is rolling balls to see who lands on the highest number. The twist? It is prank week, so they think they are doing a competition involving bird sounds. The winner’s duties will also be pranked, based on America’s votes.

There is also a chance someone could share their power based on the vote. There will also be a secret prankster that will secretly choose all the nominees this week, both the initial ones and if one wins POV.

Holly wins and we have to see what happens on Sunday. Stay tuned.