After I turned 15, I started making music in India with various bands, including one which was playing music with African musicians and influences. We playedin clubs, concert venues and campuses across major Indian cities. At 20 I left India to live and work in Switzerland. That’s when I started to record my own songs with my band Mainstreet. We released four albums and two “best of” albums in Europe. Mainstreet had four singles that made it to the Swiss Radio charts and we played a number of successful tours across Western Europe. During this time I also worked in various studios as a recording engineer and producer. I disbanded Mainstreet in 1995 and worked on developing my own style of songwriting and my own sound. My current album ‘Little Boat’ is my fourth album as a solo artist, which follows “9 to 3” (2015), “Come See Conquer” (2013) and “A Matter of Time” (2011).

–Who inspires you as an artist?

It has always been and still is the great songwriters of our time, like The Beatles, David Bowie, Jackson Browne, Bob Dylan, Beck, Tom Petty, Don Henley, Jonathan Wilson, and Roger Waters, who inspire me. I have always loved American music. The profound craftsmanship of Led Zeppelin, Jimi Hendrix, Jeff Beck, Eric Clapton, Jack White and Frank Zappa, just to name a few, have deeply inspired me. I am also inspired by the people around me. I love their stories and experiences. It’s because of all the different kinds of people in my life that I am compelled to include unusual instruments and melodies in my songs. I mix, cross and morph different genres and styles to get my songs to a point where they reflect the mood I am going for, my experiences, the lessons I am learning and the people I am interacting with. This mostly happens unconsciously.

-Tell me about working on Little Boat and what inspired it.

Writing and recording new songs is a continuous process for me. I usually do it whenever the spirit moves me without any particular album in mind. That comes much later on. By the time I started thinking about the concept for a new album, I had already recorded about 26 songs. Somehow, the song ‘Little Boat’ was my first choice for a new album and for the album title. This song had something so intriguing about it that it made me want to listen to it again and again. I could sit for hours in the studio and listen to ‘Little Boat’ on repeat. I’m not quite sure whether it was the infectious guitar work by my friend Christian Winiker, or the powerful lyrics about resilience by Mary Lou von Wyl. The analogy of a little boat that perseveres through the shattering storms of life really resonated with me and kept surprising me every time I listened to it. In fact, resilience is the best way to describe the thread that runs through the songs on Little Boat and all of the songs that I chose to put on the album touch this theme in one way or the other.

Just like most people, a lot of my life has been about resilience or getting stronger as you go through difficult situations. The songs on Little Boat are about bouncing back and being stronger and better. The songs approach this in different ways – comically in ‘Forget About Yesterday’ and ‘Grooving in Paris’, cathartically in the rock ballad ‘Ordinary Memory’, defiant in ‘While I’m Still Standing Here’, with hope in the haunting title song ‘Little Boat’, powerfully aspiring in the opening song ‘Here’s the Love’ and in a celebratory crescendo on the album’s final song ‘Time For Deliverance’.

What is most interesting and surprising is how Little Boat has picked up unexpected passengers along the way. Independent of each other, various digital artists from around the globe including from Istanbul, Warsaw and Los Angeles, have felt compelled to get involved with the album. The results are colorful, artistic videos that accompany the songs on Little Boat. The videos are on my website and my YouTube channel. I think the videos and maybe some stills from the videos, along with the music, could make a really vibrant multi-media exhibition of digital art. I am currently looking for exhibition curators who arewilling to take the baton. Is there anybody out there?

–Who are some people you want to collaborate with?

I am always collaborating with other musicians and writers. If I could, I’d love to write some songs with Lera Lynn, Alabama Shakes, or Greta Van Fleet and collaborate with Jonathan Wilson and Jack White on the production. That would be awesome!

–What’s next for you?

The video artists I mentioned are not the only passengers that have hopped on my Little Boat. Besides the digital works, an illustrated children’s book written by Mary Lou and illustrated by an artist in Delhi, India as well as a full-length novel weaving through the themes in Little Boat by an American writer living in Switzerland are in the works. I’m currently on the road in central Europe promoting ‘Little Boat’, doing TV and radio shows and concerts. I’m also recording new songs in my studio for the next album.

–Tell me a surprising, fun fact about yourself.

Sometimes you experience an event or a moment that feels like the beginning of something and ends up taking up a lot of space in your life. I had an experience like that in my early teens when I was extremely fortunate and got to meet and talk to The Beatles in person. They were at the ashram of an Indian guru they had adopted – one of John Lennon’s most beautiful songs ‘Across the Universe’ is dedicated to him – back in the late 60s. I got lucky and got a chance to interview them for my school paper. I wasn’t interested in music at that point and I didn’t play an instrument yet, but I remember after meeting them that I had a strong feeling that somehow our paths would cross again. A few decades and many songs later, I got the opportunity to finish off my album ‘Little Boat’ at the iconic Abbey Road Studios in London. There I was, walking up the stairs, into the rooms where some of the most beautiful and disruptive music in history had been created. It was an amazing feeling and my music sounded awesome in those rooms. In a way, I felt like I had come full circle in my music life and that our paths – The Beatles and mine – had finally crossed again.

To be honest, I don’t always have a lot of patience with TV. On occasion I do watch documentaries and fantasy fiction. I look forward to watching some of those excellent Oscar nominated/winning documentaries like Roma and Black Sheep.

-Anything else you want to tell America?

Music connects people. It gives us something in common. Keep listening! Keep exploring and finding new things to listen to. There is so much talent out there and the possibilities of finding it are better than ever. Let your kids learn how to play instruments. Support artists and your local shops. Keep the music alive and thanks for listening! 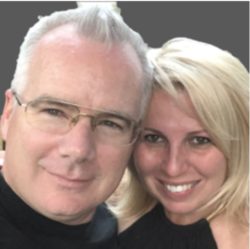