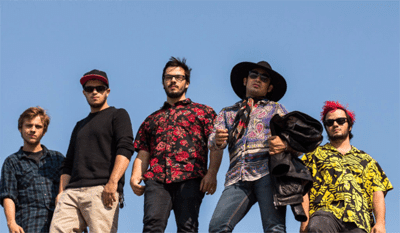 –Tell me a bit abut how your career began.
As long as I can remember,I have felt a connection to music and have been playing instruments and performing from a very young age.

I started playing drums when i was 9 years old and joined bands at age 13. shortly after i knew that i was really interested more in
writing my own music and picking up the guitar,  so by 16/17 I started putting myself out there at the local open mics.

In 2007/2008 there weren’t many places on Long Island you could perform your music so it wasn’t until i was 21 that I really got started.

I was writing all the time and out of sheer fate I  met someone who was very kind and began to help me record whatever I’d come up with.

We must have recorded almost 100 songs between 2011 and 2013 and i was the only person playing the instruments but that inevitably lead to being equipped with the material I needed to form the band which happened in late 2014.

-Who inspires you as an artist?
It has changed so much but over time it really comes down to James Brown and the Beatles. the two collectively encompass such a great deal of what music has evolved into over time and have so much to offer and really the impact they have had is enormous and my aspirations could be a bit high but they are what set the standard for where i want to be.

-Tell me about working on this single and what inspired it.
Much like working on music with the band we have so much time that we spend trying to shape our recordings into the visions we have for them. Stomach Coil was no different. The song for me was written back in 2013 when I was struggling to overcome  some of the obstacles I was facing and almost anything could keep me up at night. The song is based on our current time and our sometimes failure to keep an open mind as a people. I’ve heard so many times that history always repeats itself and with World War 2 in mind with tyrannic leaders in command committing genocide, it took the world to put an end to it. my overall hope was to
spread the message that we have to be the change we want to see in our world in order for history not to repeat itself.

-Who are some people you want to collaborate with?
I would love to make tracks with artists like Breakbot or Flamingosis. a lot of the electronic music is really groovy and has so much of what I’m looking to incorporate in my own music. I listen to them all the time. but for bands I love Childhood and Jamiroquai also. I would throw down with any of those dudes anytime.

-What’s next for you?
The band is currently in the studio (which we always are) with a 5 track follow up to our debut EP Fortune Favors The Bold that we released march of 2018.
We don’t have a name for it but all the songs have been recorded now the real magic has to take place. On top of that we are trying to branch out
of our little island and make some new friends. time is unforgiving and will slip by in the blink of an eye.

-Tell me a surprising, fun fact about yourself.
I love to cook. I could never do it professionally but there are certain things I cannot make without informing the band I am doing so.
When we would travel, I would cook to save us money and now I’m basically band grandma. I can’t lie, I enjoy the title.

-What are you watching on TV these days?
I could rewatch Futurama forever and 3 or 4 nights a week I do. I can’t help but youtube 3 hour blocks of old Tom and Jerry and
Looney Tunes also. but I really only watch TV before i go to bed late at night. thank god for Apple TV.