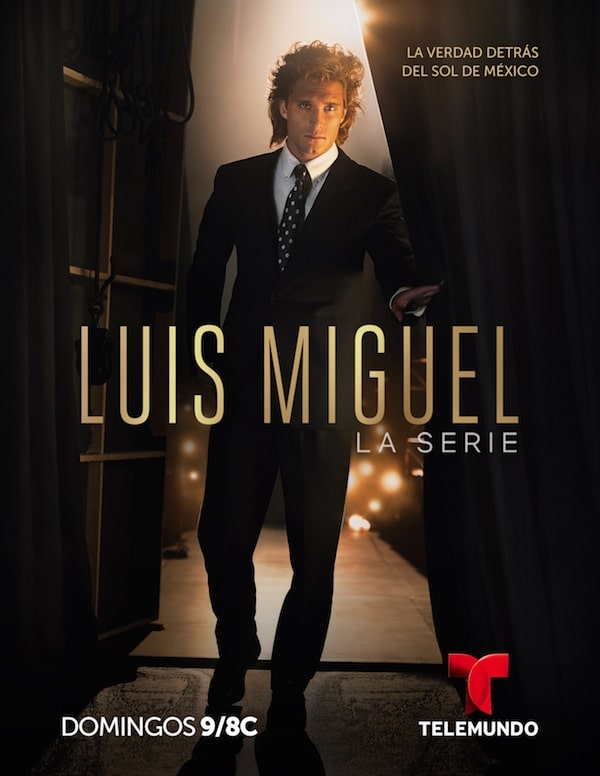 The worldwide premiere of the highly anticipated original production, Luis Miguel Series, is set to air every Sunday starting April 22 at 9pm/8c exclusively on Telemundo for the U.S. and Puerto Rico, and throughout Latin America and Spain on Netflix. The series presents the only authorized story on the life of multi-platinum artist and global superstar Luis Miguel, played by Diego Boneta. Also known as El Sol de México (The Sun of Mexico), Luis Miguel has led a life in the public eye, but little is known about the man behind the star… until now.

Set in México, Luis Miguel Series explores his childhood in the early 80s and what led up to his massive success as a recording artist in the 90’s. Before being known to the world as “Luis Miguel,” Micky (Izan Llunas and Luis de la Rosa) as he is called within the family, finds great comfort and safety with his adoring mother Marcela (Anna Favella) and younger brother Alex (Juan Pablo “JuanPa” Zurita). Exhibiting a natural talent as a singer, earning acclaim and popularity by the time he reaches the age of 11, his father Luis Rey (Oscar Jaenada) ramps up an obsessive campaign to turn his oldest son into a superstar, belying his own failed dreams of similar success. As Micky grows into the leading pop star of the era known as Luis Miguel he finds it challenging to strike a balance between his career and private life including his relationships with his true loves, played by Paulina Dávila and Camila Sodi, respectively.  As the world thirsts for the carefully nurtured image of tanned masculinity and blazing white smile synonymous with the Acapulco lifestyle that was the hallmark of his early career, what lies underneath is a potent story of how fame and fortune can change a family. Told in a bold style that is as dramatic, emotional, sensual, controversial, and romantic as his musical artistry, Luis Miguel Seriesadds daring in its scope to illuminate the details of the man that remains “El Sol de México.”

Luis Miguel Series is the officially authorized story of the life of the internationally renowned superstar and Grammy award-winning multi-platinum recording artist, Luis Miguel. At the age of 17, Luis Miguel became one of the world’s most recognized singers in the world. As his fame soared, privately, the musical icon struggled with personal tragedies–from the mysterious disappearance of his mother to the painful estrangement from his father and manager, Luis Rey. Through it all, Luis Miguel maintained his greatest passion: music.

NBCUniversal Telemundo Enterprises is a world-class media company leading the industry in the production and distribution of high-quality Spanish-language content to U.S. Hispanics and audiences around the world. This fast-growing multiplatform portfolio is comprised of the Telemundo Network and Station Group, Telemundo Deportes, Telemundo Global Studios, Universo, and a Digital Enterprises & Emerging Business unit. Telemundo Network features original Spanish-language entertainment, news and sports content reaching 94% of U.S. Hispanic TV households in 210 markets through 27 local stations, 51 affiliates and its national feed. Telemundo also owns WKAQ, a television station that serves viewers in Puerto Rico. Telemundo Deportes is the designated Spanish-language home of two of the world’s most popular sporting events: FIFA World Cup™ through 2026 and the Summer Olympic Games through 2032. Telemundo Global Studios is the company’s domestic and international scripted production unit including Telemundo Studios, Telemundo International Studios, Telemundo International, as well as all of the company’s co-production partnerships.  As the #1 media company reaching Hispanics and millennials online, the Digital Enterprises & Emerging Business unit distributes original content across multiple platforms, maximizing its exclusive partnerships with properties such as BuzzFeed, Vox, and Snapchat. Through Telemundo Internacional, the largest U.S.-based distributor of Spanish-language content in the world; and Universo, the fastest growing Hispanic entertainment cable network, the company reflects the diverse lifestyle, cultural experience and language of its expanding audience. NBCUniversal Telemundo Enterprises is a division of NBCUniversal, a subsidiary of Comcast Corporation.

Netflix is the world’s leading internet entertainment service with over 117 million members in over 190 countries enjoying more than 140 million hours of TV shows and movies per day, including original series, documentaries and feature films. Members can watch as much as they want, anytime, anywhere, on nearly any internet-connected screen. Members can play, pause and resume watching, all without commercials or commitments.