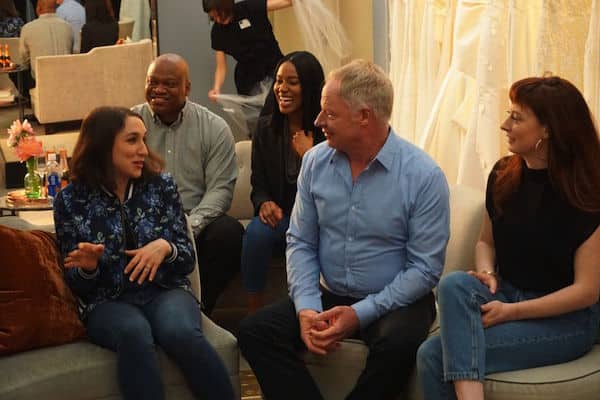 Netflix will unveil “Father Knows Best?” a fun and light-hearted short film showcasing three newly engaged daughters and their fathers at Saks Fifth Avenue’s Bridal Salon in New York City on a mission to pick out the perfect wedding dress for the bride. But here’s the catch: the father has to pick out the wedding dress (for his daughter)!

“Father Knows Best?” was inspired by the premiere of the new original film, “The Week Of,” starring Adam Sandler and Chris Rock, which will begin streaming on “Netflix” beginning today, Friday, April 27. “Father Knows Best?” will appear in cut down versions/segments on Netflix social platforms (Facebook/Instagram/Twitter) beginning today, Friday, April 27, as well.

The father-daughter duos attended the day-long event for a chance to win one $10,000 Saks Fifth Avenue wedding dress for the upcoming nuptials. To help the eager brides and anxious fathers through the day, “Allie The Bridesmaid” served as the film’s host, while Tan France, star of Netflix’s “Queer Eye,” assisted the fathers on style tips for selecting the perfect wedding dress for their daughters.

The three culturally diverse families were also interviewed by Allie, showcasing the interaction between real life fathers and their engaged daughters. Questions included how well the fathers and daughters knew each other and their thoughts on relationships and marriage. In some poignant and touching moments, all agreed the fathers wanted to give the best possible wedding experience for their daughters.